The Bureau of Ocean Energy Management (BOEM) announced last week that it is moving forward with the next step to consider commercial wind energy development on the Outer Continental Shelf (OCS) offshore of Massachusetts.

BOEM said it has completed definition of a Wind Energy Area (WEA) with high wind potential for possible commercial leasing.

“The Wind Energy Area that we are announcing today is the result of extensive work with our partners in the Commonwealth and with a broad community of stakeholders as we move forward with responsible leasing and development of offshore wind resources,” said BOEM Director Tommy P. Beaudreau in a press release issued May 30. “The area off of Massachusetts has tremendous energy generation potential, and we will continue to evaluate and mitigate the potential impacts of offshore wind energy development on wildlife habitat, fisheries and sea bird migration.”

On February 6, BOEM published a Call for Information and Nominations for Commercial Leasing in the OCS off Massachusetts and a Notice of Intent to prepare an environmental assessment of this area. After considering numerous comments submitted in response to the Call, BOEM said, it decided to exclude certain areas identified as important habitats that could be adversely affected if ultimately developed with the installation of wind turbine generators.

“Specifically, BOEM has excluded an area of high sea duck concentration, as well as an area of high value fisheries to reduce conflict with commercial and recreational fishing activities. The fisheries exclusion area is a continuation of the Cox’s Ledge area excluded from leasing consideration in the Rhode Island/Massachusetts WEA announced on February 24, 2012. The excluded areas will not be considered further for leasing.”

“At this stage, BOEM is only considering the issuance of leases and approval of site assessment plans in this WEA. If, after leases are issued, a lessee proposes to construct a commercial wind energy facility, it would submit a construction and operations plan, at which point BOEM would prepare a site-specific NEPA [National Environmental Policy Act] document for the project proposed, including the lessee’s proposed transmission line(s) to shore.”

In February, the visual impact of a wind turbine farm in federal waters south of Martha’s Vineyard and its effects on marine life topped the list of concerns Islanders discussed with state and Federal energy officials at a public information meeting hosted by the state Executive Office of Energy and Environmental Affairs (EEA) at the Katharine Cornell Theatre in Vineyard Haven.

BOEM officials also attended to give information and take public comment on a recent call for information and nominations for an area proposed for commercial wind energy development.

In comments from the audience, Bill Connolly of Edgartown complimented the officials for investigating the issues thoroughly and questioned why there was no mention of visual impact. He asked how tall the wind turbines would be and whether they would be visible from the Island’s shoreline.

BOEM said that more specifics about visual impact would be included in the construction operation plan stage, when developers offer more details about the wind turbines they plan to build, particularly their height.

The map that appeared in the print edition is the original area considered for development. The amended maps appear in the series of maps attached to the online version. 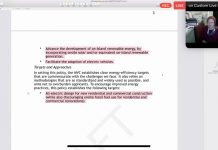 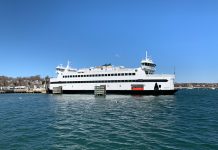