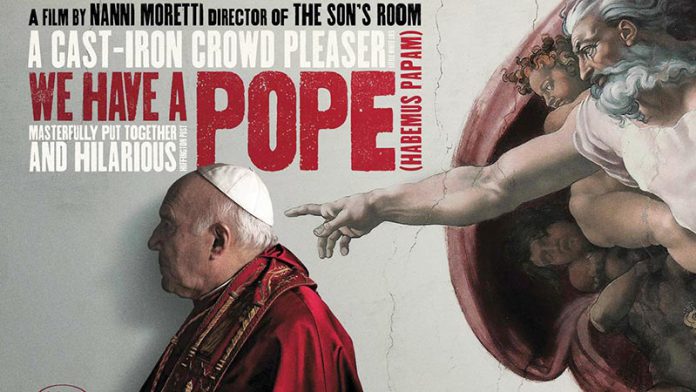 “We Have a Pope” – A whimsical house of cardinals

This movie, “We Have a Pope,” has the feel of something written by Mark Twain – well, in his pre-bitter years. Directed by Nanni Moretti (“Dear Diary,” “The Son’s Room”), we get a gentle comedy about the foibles and frailties of a man: it just happens that this man (Michael Piccoli) has just been elected the new pope.

Melville, the pope-elect, never figured he was even a long shot but there he is: be-robed and being summoned to address the faithful in St. Peter’s Square. (This movie is worth seeing if for no other reason than the pageantry and opulence of the Papacy as backdrop.) But his crisis of faith hits at just the wrong (or right?) time, and he never makes it to the balcony.

But didn’t God have a hand in this choice? How is it possible that there’s doubt? The cardinals bring in a shrink (played adroitly by the director himself) to delve into Melville’s past and when he’s unsuccessful, Melville is handed off to another shrink (the estranged wife of the first shrink — a bit of jury-rigged plotting). She guesses parental neglect (God the Father?) is the culprit and Melville, perhaps feeling he has missed out on life, escapes his handlers to roam Rome.

Now there’s really a crisis because neither the faithful nor the press knows either the doubt or the whereabouts – which nobody knows – of the man about town. Enjoying his anonymity, Melville falls in with an acting troupe presenting Chekhov’s “The Seagull,” which he happens to know by heart. A scheme has a member of the Swiss Guard parade occasionally behind the real pope’s apartment curtains so the people outside assume the newly elected pope is pacing and praying his way into readiness for the job ahead.

As Melville becomes more entrenched with the actors, his Vatican brethren are kept busy playing volleyball (teams are designated by geography so the under-represented Asians are constantly clobbered). It’s all a whimsical house of cardinals, but it holds up at least until the lights come on.

Two elderly Oscar winners (best supporting actress) walk into a lesbian script, and nothing is barred.

Stella, (Olympia Dukakis, “Moonstruck”) and Dot (Brenda Fricker, “My Left Foot”) have been a couple for 31 years. Dot is legally blind, gentle, and, well, female, while Stella is manly enough to outswear a sailor with a dictionary of slang handy. Seems like everyone in this Maine seacoast village is in on the secret except Dot’s sole relative, her granddaughter Molly (Kristin Booth). Molly wants to put Dot in a nursing home, and Stella, fighting through the restraining cop, yells “She’s going to take you away and have you cremated.” Trusting Dot asks Molly, “Are you going to cremate me?!” “Well, not yet,” Molly demurs.

So Stella, to get this road movie on the road, pretends she’s a delinquent resident out after the old age home’s curfew and breaks out her partner. In the beat-up Ford pickup, they head to Nova Scotia where they’ll legally wed and avoid these intrusive manipulations. The plot, such as it is, ambles forward with the inclusion of a young male hitchhiker who’s heading north to visit his dying mother. Throw in some border crossing problems, some objections coming forward at the wedding ceremony, some scenery, and you’ve got a winning movie.

The characters (director Thom Fitzgerald worked from his own play) are warmly drawn and there are several flat-out funny lines and situations, about as ribald as you want as long as you eschew an MPAA rating. Example: Dot, listening to the TV, asks Stella when she comes in, “What’s a Swiffer?” “Kind of a flat mop.” “A mop?! Well these women on TV make it sound like it gives you multiple orgasms.” “Any mop can give you an orgasm,” Stella deadpans. And if you don’t close your eyes, look for an angry naked man in the bouncing bed of the pickup. It’s something Buster Keaton would have done, if only.

“Cloudburst” will be shown by Martha’s Vineyard Film Festival on Wednesday, July 25, at the Chilmark Community Center at 8 pm. Tickets are $15; $7 for members. Visit tmvff.org for more information and tickets.