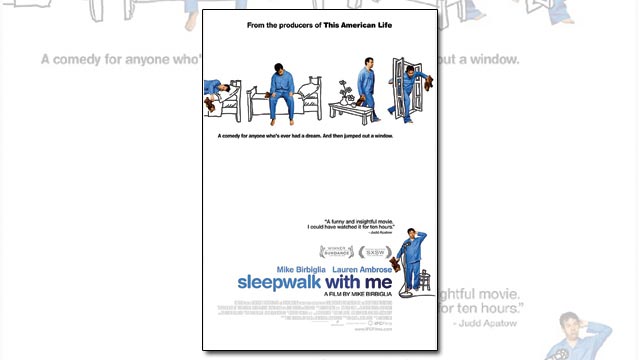 The following is a synopsis of upcoming films shown by various organizations and film groups on Martha’s Vineyard.

“Sleepwalk with Me”: Stay in a punch line

This is the stuff of dreams: you turn a sleep disorder into a one-man show off-Broadway, turn that into a book, then turn that into a movie that you direct, star in, and co-write (with three others – slacker!).

The man at the center of all this is Mike Birbiglia, whose persona is a hybrid of Garrison Keilor and Woody Allen: near-crippling angst told leisurely over a serving of apple pie and milk. This is basically (and I mean basic) a story of a comedian struggling to establish a career and a committed relationship (although Mike might consider his eight years of sticking with on-screen girlfriend Lauren Ambrose as qualifying).

With not a lot of plot (will he? will they?) going for it, Birbiglia is so genial you’re in his corner no matter how many times he gets knocked down. (Aside: a comedian these days who doesn’t swear? How refreshing. About the harshest thing in his act is desperately calling someone in the sparse audience a loser because of the shirt he has on. But he quickly apologizes and admits he likes the shirt.)

If Freud had a sense of humor, he would appreciate the scenes where as Birbiglia grows increasingly unable to express his feelings (i.e., toward any future), his sleepwalking episodes become more dangerous. Starting with a laundry hamper embodying a jackal, as his girlfriend ratchets up the marriage talk, he quickly segues into injuring himself during, for example, the Olympic dust-busting event.

His career starts to take off (oh yeah, he also flies through a window) when he starts to literally be himself on stage and relate his troubles. That means more gigs that just about cover the gas money to get there, more time away from Lauren, and as we all remember from high school physics, gravity diminishes as a square of distance (do I even have to explain?). You do the math and show all work. As a reward, watch this film — it’s all play.

The one-hour documentary uses dramatic re-enactments, historical photos, and interviews with past members to capture the day-to-day challenges and joys of the summer stock experience. Beginning in 1950 and lasting until 1976, temperamental young actors and actresses would live together, work for pennies, and do odd jobs in pursuit of refining their craft and creating a professional theatrical production each week.

Author Kurt Vonnegut, an Orleans Arena Theatre alumnus, reflects on his time at the distinguished American art colony and its founders, Betsy and Gordon Argo. “People would work this hard for nothing?” Vonnegut asks rhetorically. “They would, because that’s theater.”

“Stagestruck,” shown in collaboration with the Martha’s Vineyard Film Society and the M.V. Museum, will be shown at 7:30 pm at the Katherine Cornell Theatre in Vineyard Haven on Wednesday, Aug. 22. Special guest is director Liz Argo. $8; $5 for museum and film society members. 508-627-4441; mvmuseum.org.

“How to Start a Revolution”: Get sharp

There have been revolutions in orange, green, yellow around the world and one man may be most responsible for the template: he’s Gene Sharp, professor emeritus of political science at the University of Massachusetts Dartmouth, and the subject of “How to Start a Revolution.”

He has written extensively (14 books) on non-violent struggle, even codifying the transformation of dictatorships into democracy into 198 rules, including mock funerals, vigils, slogans, boycotts, collective disappearances (?!), hunger strikes, hartal (massive strikes including closing schools and businesses), dual sovereignty, motorcades, parallel government, etc. This is a man who knows the pressure points of power.

In 1983 Sharp founded the nonprofit Albert Einstein Institution, whose stated mission is to advance “the study and use of strategic nonviolent action in conflicts throughout the world.” This screening is a benefit for that organization and the Martha’s Vineyard Peace Council.

“How to Start a Revolution” will be shown at Katherine Cornell Theatre in Vineyard Haven on Thursday, Aug. 16, at 7:30 pm. Special guest: Director Ruaridh Arrow.