Dukes County Superior Court Associate Justice C.J. Moriarty Monday sentenced Daniel BenDavid to four years probation and ordered him to make full restitution to the victim for his part in the theft of a safe containing $85,000, the life savings of a 77-year-old Oak Bluffs neighbor.

As part of a plea agreement, Mr. BenDavid admitted in court Monday that he and an accomplice, Stanley Johnson, broke into the home, stole the life savings of the neighbor, and concealed the cash off Island.

Last week, a jury convicted Mr. Johnson of the crime. On October 16, Judge Moriarty sentenced him to five to seven years in state prison. Mr. BenDavid testified against Mr. Johnson in that trial.

Dukes County Superior Court Associate Justice C.J. Moriarty accepted most of the elements of a plea agreement between Cape and Island assistant district attorney Laura Marshard and defense attorney Rob Hoffman, though he said the seriousness of the crime, and Mr. BenDavid’s previous criminal record, made it difficult for him to do.

“Clearly, clearly, under almost any other circumstance, Mr. Ben David should be going to prison for a very significant period of time,” Judge Moriarty said in a sentencing hearing October 22.

Judge Moriarty said he took into consideration Mr. BenDavid’s cooperation with the prosecutor, and his return of $31,500 stolen from the safe. He ordered restitution in the full amount, less money already recovered, a departure from the plea agreement between the two attorneys. The agreement called for Mr. BenDavid to return his proceeds from the burglary, $42,500.

“You were clearly the mastermind of this event,” Judge Moriarty said. “Your prior periods of incarceration just don’t seem to have any effect on you. What makes this extremely despicable is the fact that you targeted an elderly man. I give you good warning, sir, if you are found to have violated the terms of this probation, you will be going to state prison for an awful long time.”

Judge Moriarty set other conditions of probation, including a requirement that Mr. BenDavid remain employed, that he submit to random drug and alcohol screens, and that he stay away from the victim. 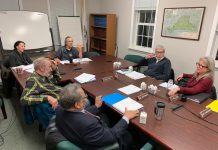