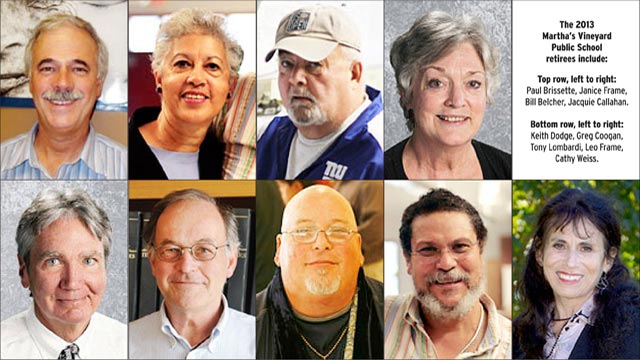 With the end of the 2012-2013 school year next week, a group of 19 Martha’s Vineyard Public Schools (MVPS) employees — including teachers, transportation, and custodial staff — will bid a last goodbye to their students and co-workers and retire from their jobs. Their employment time ranges from 10 to 32 years.

At an Island-wide retirement party on May 29 at the Harbor View Hotel, MVPS superintendent James Weiss noted the retirees have served students for a combined total of more than 400 years.

“This year we are seeing the retirement of a wide range of staff from many schools but especially from Tisbury and the high school,” Mr. Weiss said in response to an email from The Times this week. “Both schools will see numbers of longtime staff moving on. While change is always a good thing, we will need to work carefully to replace the institutional memory and skills of people like Greg Coogan, Paul Brissette and Leo and Janice Frame, just to mention a few.”

From one course to thirty

In addition to being a teacher, Mr. Brissette is the chairman of the high school’s art, design, and technology department. During his career, Mr. Brissette was instrumental in expanding a single-course curriculum into an award-winning, nationally recognized program with 30 course offerings, seven specialized art, design, and computer facilities, and four instructors. He was recognized for that last October with the 2012 Creative Living Award from the Permanent Endowment Fund for Martha’s Vineyard.

In an email to The Times, Mr. Brissette said that after looking forward to his retirement for the last couple of year, he can’t believe it is finally happening.

“It’s been 33 years working with adolescents and for the most part I looked forward to going to work each day,” he said. “It’s time for me to finally graduate from high school. Like the recent class of graduates, I am excited about what lies ahead, coupled with nostalgia for my many wonderful years at MVRHS.”

Mr. Brissette said retirement offers him the opportunity to cut back on scheduled work time and increase time for exercise and health, family, travel, and creative pursuits.

Ms. Weiss started her career at Tisbury School as an assistant to kindergarten teacher Claire Joannidi for 23 years. After Ms. Joannidi retired, Ms. Weiss moved up to the junior high level to work as grade 7-8 teacher Connie Alexander’s ESP for several years. She worked with fifth- and sixth-graders this year.

Ms. Weiss said she has always especially enjoyed helping with the science curriculum, with activities such as beach walks, fish tanks, composting, and growing worms. In addition to her classroom duties, she started the Tisbury School Garden several years ago with former principal Richie Smith.

Ms. Weiss also choreographed 32 school stage productions over the years. She said she is going to miss that, but she is confident and happy about passing the torch to ESP Jane Taylor, who has experience choreographing ice shows.

In her retirement, Ms. Weiss said she plans to “travel like crazy,” take long walks, with a goal to complete the entire Island perimeter, collect heart-shaped rocks, and finish photo albums.

Invited to speak at Tisbury School’s eighth-grade graduation, Ms. Weiss said she concluded her remarks with familiar words that got a laugh from her students: “Most importantly, always sit up straight in your chair and don’t put your feet up on the furniture.”

Ms. Kelley became West Tisbury School’s K-8 SPED teacher after moving to Martha’s Vineyard with her family in 1983. She switched to being a fifth-grade teacher in 1990 and remained one for 23 years. She said she loves teaching fifth grade and thinks it is one of the best and most pivotal years in students’ lives.

Five and a half years ago, Ms. Kelley and her family moved to Falmouth to help care for her aging parents, who are now deceased. She said she hasn’t minded making the commute to West Tisbury School, because she wanted to keep working at a place she loves, with people that are like family to her.

Ms. Kelley described the end of her last school year as “bittersweet.”

“This will be my final break from Martha’s Vineyard, since moving off Island,” she said. “I’m looking forward to spending more time with my husband, but I’m going to miss everybody here. I had one of the best classes I’ve ever had, though, and a really fun year, so to end on this note, with this class, has been fabulous.”

Ms. Kelley also has many memories she can relive from school trips she made for 21 years to Boston’s Museum of Science.

In addition to being a teacher, Mr. Coogan has been active in civic affairs for many years. He was elected in April 2012 to his fourth term as an Oak Bluffs selectman.Since he is used to wearing many hats, Mr. Coogan told The Times he will probably continue working in some other way after he retires from teaching. He also plans to work on and sail an old boat that he has that was built in 1922.

“There’s a lot going on, so I’m not going to stop working or living or anything like that; I’m just going to go on to a new phase,” Mr. Coogan said.

This story was updated to replace a portion of copy omitted from the original digital and print version.