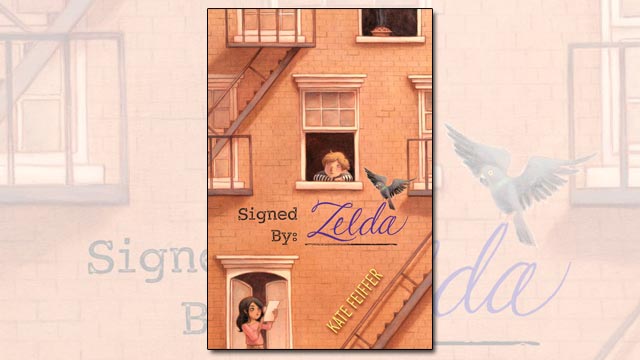 It’s a dreary Saturday morning and children’s book author Kate Feiffer is painstakingly reviewing the third draft of her newest chapter book in the cozy studio adjacent to her Oak Bluffs home.

“I have a terrible time finishing,” Ms. Feiffer admits. “I can’t stop tweaking, needling at my work. A deadline is the only way I finish.”

The daughter of legendary writer, cartoonist, Pulitzer Prize- and Academy award-winner Jules Feiffer, Ms. Feiffer says she once struggled to find the confidence to begin working as a children’s author. Now, with 11 published books of her own on the shelf, and a 12th on its way, she is brimming with ideas for new projects.

“It was always my dream to write for children,” she says, “but my father did it, so I had hang-ups.” She hastens to add: “He was incredibly supportive. They were my issues.”

Daughter and father share not only a way with words but — as evidenced by Ms. Feiffer’s latest foray into the arts — with the satirical pen as well. Mr. Feiffer, children’s book author/illustrator, playwright, screenwriter, is perhaps best known as the creator of an internationally syndicated cartoon that ran for more than 40 years in the weekly “Village Voice,” a New York City newspaper.

Ms. Feiffer, an inveterate doodler, has recently begun to find her own public voice through the witty illustrations she has penned privately for years. After sharing them on her Facebook page occasionally, she is now commissioned to create them by this newspaper and will be exhibiting them at The Vineyard Playhouse during the last two weeks of August.

“My father gave me drawing lessons for years,” Ms. Feiffer explains. “He was supposed to do them daily and he stopped when I was about 10. We had a long-running joke that he owed me 361 more.”

While she has taken occasional drawing lessons as an adult, she is a largely self-taught illustrator. And, now that she’s gone public, she acknowledges that she’d love to do even more. “I always enjoyed finding the character, the line, and playing with color,” she says. Could her humorous illustrations find a way into her children’s books?

Her latest chapter book, “Signed by Zelda,” published by Simon and Schuster in 2012, has just been released in softcover. Inspired by conversations with Oak Bluffs neighbor, retired FBI agent Alan Robillard, a handwriting expert, the story involves two 11-year-old neighbors in a New York City apartment building who collaborate to search for a missing grandmother. A cryptic letter and other clues enable both Ms. Feiffer and Lucy, the protagonist, to apply amateur handwriting analysis and quirky humor along the way.

Her nine previous picture books and two chapter books have covered a broad range of topics — dogs, babies, an obsession with the color pink, and pre-teen angst — while her work in progress is about a town that tries to launch a world record contest. Many of her stories are derived from real life: her own childhood experiences and parenting her daughter, Maddy, now 15 years old. As Maddy has grown, Ms. Feiffer says her work has evolved from simpler picture books for children ages three to eight, to chapter books for seven- to 11-year-olds. The ideas that come to fruition, she says, are those that persist, ideas that “don’t retreat.”

She is driven by her internal engine, as she calls it, and strives to create stories that children will respond to with laughter and joy. To that end, she and her father have collaborated on several projects and she has teamed up with award-winning illustrator Diane Goode as well. Through her creation of children’s books, Ms. Feiffer says she now knows people whose work she has always admired.

And, while she has found somewhat unexpected joy in interactions with children in classrooms across the country, she acknowledges that doing the legwork to make appearances happen can be daunting. Adept at social networking, Ms. Feiffer, a former film producer and photo editor, applies her communication skills to self-promotion. “I’m pretty good about Facebook,” she says. “Twitter, not so much.”

Skype enables her to visit classrooms virtually, something she hopes to do more of in the future. “I love going into schools and talking to kids,” she says. “It’s a myth that they don’t read anymore. They’re so excited by reading, writing, and storytelling.”

Juggling writing, illustration, family, and volunteer activities in the community, Ms. Feiffer has struck a balance in her life on the Island. “It’s an incredibly nurturing community with so many talented people,” she says.

As she looks back on her career, she sees a new direction each decade. Pen and keyboard poised, Ms. Feiffer appears ready for whatever challenges she takes on next.

Secret Handwriting Workshop with Kate Feiffer, Tuesday, July 9, 10:30–11:30 am, Oak Bluffs Library. Bring the kids for a fun and fascinating event ideal for 8- to 12-year-olds. Inspired by “Signed by Zelda,” Ms. Feiffer will introduce young readers to the science of handwriting analysis as they search for a missing toy dog hidden in the library. Free. 508-693-9433.