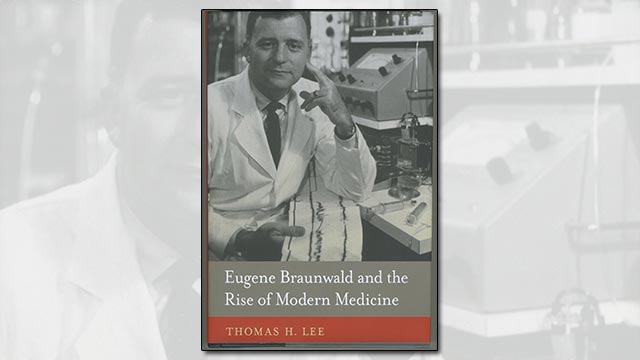 In 1965, Eugene Braunwald visited his boyhood home in Vienna. He and his family fled Austria in 1938, shortly after Germany annexed his native country and the SS dissolved his family’s wholesale textile business. Of course, in 1965 Braunwald was no longer the boy who had seen his father carted off in an SS truck, not the boy who, with his family, had escaped the persecution then inevitable and undisguised in Austria, first to neutral Switzerland, then to threatened London, and finally to the United States.

As Thomas H. Lee, cardiologist, professor at Harvard Medical School, and network president at Partners HealthCare, explains, “In the decades that followed that hasty departure, Braunwald would become a professor at Harvard Medical School and chairman of the Department of Medicine at Peter Bent Brigham Hospital in Boston. He would become the most prolific and arguably the most influential cardiology researcher in the world. He would visit Vienna for many medical meetings, but that day in 1965 marked the first time he returned to his boyhood home.”

Tom Lee and his family have been West Tisbury summer residents for decades. His mother, Kin Ping, had a memorably fashionable dress shop on Main Street in Edgartown for years. His father, an engineer, worked for GE building nuclear power plants. And, Scotty Reston and I hired Tom as a summer intern at the Vineyard Gazette, where I was managing editor in the 1970s. He had been an editor at the Harvard Crimson, and his work at the Gazette convinced Reston and me that he would certainly be a writer or journalist one day. We weren’t altogether wrong, though we had the timing off. Now, a practicing cardiologist at the Brigham, Tom’s array of talents and his interest in history, particularly the history of medical progress, have combined in the publication of Eugene Braunwald and the Rise of Modern Medicine (Harvard University Press, Cambridge. 383 pp. $35.)

Tom has married his habit of meticulous research to his native skill as an interviewer and storyteller to describe in careful detail and an engaging prose style the explosive advancement of modern medicine — the drugs, the devices, the diagnostic and therapeutic techniques, the research achievements, and the changes in physician training — in the second half of the 20th Century. The changes he documents, many of them the consequences of Braunwald’s work, transformed earlier approaches to medical treatment. Heart disease, for example, Braunwald’s long and passionate focus, had been treated more passively, even fatalistically, than it is today: “The emphasis was on rest, losing weight, and treating conditions that might increase the heart’s workload. … the goal was to decrease the heart’s work as much as possible.” Young physicians were told that even death from the disease “might well serve the purpose of reducing burdens on younger generations.”

Modern approaches are more aggressive, and “Much of Eugene Braunwald’s career would be devoted to changing that fatalism about myocardial infarction — to finding medications and other treatment strategies that can extend life for patients with atherosclerosis.”

Tom’s history of the change in medical care follows Braunwald’s exceptional career, brilliant and committed, but underlying the narrative is Tom’s understanding of the impulsion contributed to that trajectory by Braunwald’s immigrant experience and his determination not to trifle with the opportunity to do important work.

A line written by Oscar Handlin, the historian who grew up in Brooklyn as Braunwald did, and invoked by Tom suggests an important collateral dimension of his interest in Braunwald. “Once I thought to write a history of the immigrants in America. Then I discovered that the immigrants were American history.”

Dr. Braunwald, whose books include Braunwald’s Heart Disease, in its ninth edition, a fundamental text in cardiology, as well as Primary Cardiology, the Atlas of Internal Medicine, and the Atlas of Heart Disease, among others, followed a career path that was often skewed by the slow, unpredictable progress and frequent disappointments, plus wavering budget commitments, common to all scientific research.

Budget cuts and California politics, when Ronald Reagan was governor, led to Braunwald’s move to Boston, and to Harvard and the Brigham, from the University of California San Diego, where he had been laying the groundwork for some of his most promising and transformational work. Then there was the essential difficulty and unpredictability of medical research. Late in his tenure at the National Institutes of Health, Braunwald joined an advisory panel led by the celebrated heart surgeon Michael DeBakey. The goal, set in 1964, Dr. Lee explains, was to fund and oversee research and development of an artificial heart. The target for the program was 1970, but it was unrealistic. “The scientific foundation necessary for developing the artificial heart was inadequate. The two major engineering obstacles — the development of a surface to prevent clotting and the creation of an implantable power source — could not be overcome by 1970,” a 1984 analysis of the program concluded, calling its “initial objectives…quite naive.”

“There was this cockiness of the Kennedy era that infected all of us,” Braunwald judged. “We thought that if the country set its sights on any goal, we could accomplish it. We were going to go to the moon, and we were going to develop an artificial heart. What we learned was that biological science does not move ahead with the same predictability as the space program.”

The keys, apart from Braunwald’s brilliance as a researcher and physician, were his vision and commitment. “He would tell me,” Tom writes, “how he had always focused his career on trying to answer important questions (such as reducing mortality from myocardial infarction), and tried to ensure that his work was always connected to his big-picture goals.”

Braunwald’s story is the lens through which Tom Lee observes and describes the extraordinary advancement of medical knowledge and health care practice in the booming half century that began after World War II. Looking through that lens the other way, one discovers a human story that touches the writer deeply.

“Braunwald’s life and accomplishments are inextricably intertwined with the post-World War II history of medicine, and especially of cardiology. He was part of the wave of immigrants who injected energy and ambition into American academic medicine. His generation created a tremendous surge in knowledge through their research at the National Institutes of Health, and then at American medical schools and teaching hospitals. And they changed the way in which students and trainees learned medicine and the institutions through which health care was delivered.”

In the dedication of his book, Tom makes clear the link and the importance to him of not only Braunwald’s story, intertwined as it is with the history of medical progress, but also the nation’s story of 20th Century immigration. He writes, “To Soheyla and our daughters, Simin, Sabrina, and Ariana — four additional wondrous results of twentieth-century patterns of immigration to America.”

Travel to and from the Vineyard in 2040

How we saved Martha’s Vineyard by saving our clams

VH was down to one slip due to transfer bridge work