The Food Truck, operated by Josh Aronie, formerly of the Menemsha Café in Chilmark and Café Moxie in Vineyard Haven, celebrates its one-month anniversary this week. Parked in front of the Chilmark General Store, you can’t miss this mobile hotspot on State Road in Chilmark, serving food from 10:30 am to 2 pm, Mondays through Fridays.

Most of the menu items are $10 and under, and they change daily. Past offerings have included chili, chicken tacos, meatloaf sandwich, pulled pork, chili dogs, lemon rosemary French fries, and soups such as mushroom, kale, and carrot ginger. Don’t miss out on the fresh baked cookies and coffee from the Chilmark Coffee Company.

This past Monday I visited the truck, enjoyed a falafel salad, and asked Mr. Aronie a few questions.

What has been your most memorable day so far?

I think it was the day that we had to close the windows half way because the snow and rain were coming in, snowflakes sizes of golf balls were coming in through the window. It was probably one of the most memorable. We’ve been open throughout everything. We are a little like the post office only we are getting it done.

How late in the season will you be open and what are your plans after you close?

Right now this is pretty much just until the middle of April, and then I haven’t really made my decision on what I’m doing going beyond that.

How do you come up with items you are going to serve? Does it change daily?

We always have the breakfast burrito [made with local eggs], the falafel [served as a wrap or salad], and the chicken sandwich, and then we try to put in one or two fluctuating sandwiches or specials. Today we have the veg wrap and American chop suey. With the American chop suey we kept getting requests for it so we thought, let’s just do it, we’ll see how it goes. We know that some of the guys up here that work in the town like it. It’s actually sold pretty well today. And the veg wrap always sells well. We just go by the feel of people.

Have you run out before?

We’ve run out of a few things here and there, but we usually try to over pack. There have been days when we didn’t expect to do as many people as we did, and it’s really hard to predict how many people will show up.

What is the most popular item on the menu?

Can people call ahead for big orders?

Yes, or even for single orders. The phone number is designed more for texting than calling. We are hoping that they will see the menu online or through Twitter or whatever and order ahead of time. It helps us to be prepared especially when a lot of the construction workers are up here and they don’t have the time to be waiting around, so we try to go as fast as we can.

Any new specials on the horizon?

We’ve been using some of the old standbys that we had from the Menemsha Café. We will probably do a sausage sub and a steak and cheese. We are going to do a burger tomorrow [this past Tuesday]. We are playing it by ear, we are going by how much we sell. If we’re sold out of something, then we need to make something new tomorrow.

Are you having a good time doing it?

Visit The Food Truck Facebook page or follow them on twitter @thefoodtruckmv for the daily menu. To order ahead, call or text: 508-560-5581. The Food Truck is cash only. 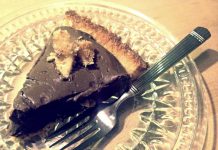 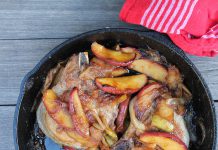 How sweet it is: Apple cinnamon pork chops 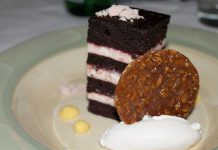 Wining and dining at the Atlantic in Edgartown