Tom Shelby, dog trainer to MV and NYC celebrities (and their dogs), answers readers’ questions about their problematic pooches. This week, the dogfather advises Arlene, whose dog is oblivious to cars, and tells a newly retired couple how to find a good dog.

Dear Dogfather,
My dog is a three-year-old Brittany spaniel female who is as sweet as can be and quite well off-leash trained. The problem is she’s completely oblivious to the danger of cars. Is there some way I can teach her to be wary, and avoid them?
Arlene

Dear Arlene,
Your question reminds me of the story of the mother rabbit at the side of the highway telling her baby rabbit that those things (cars) are nothing to worry about as they’re whizzing by. “Look, I’ll show you,” she says as she steps onto the highway with a car bearing down at 60 miles an hour, which at the last moment swerves around her. “See, I told you, they’re nothing to worry about,” says Mom as she rejoins her baby off the road. If the car smelled or moved like a wolf or coyote, a predator, as a prey animal the rabbit would have natural aversion. In our society, dogs are predator animals with no natural enemies, and wouldn’t fear a car anymore than it would fear a park bench. On the contrary, movement elicits a prey drive in dogs. That’s why the puppy chases the blowing leaf, the movement representing prey. That’s why many dogs go after joggers and skateboarders. As a trainer I’ve had to teach countless dogs to NOT go after cars, bikes, rollerbladers, etc. That’s done with a “Leave It” command: “Dog, whatever you’re focused on, be it a squirrel, cat, another dog, or car, ignore it, leave it alone!” However, not chasing a car is not the same as being wary of, or avoiding them. A client once told me that her standard poodle got “nicked” by a car, not really hurt but mildly traumatized, and is now pretty good at avoiding them. Not a suggested training method!

Considering the constant exposure our dogs have to cars, having them avoiding or fleeing from moving cars would make for miserable walks. Imagine trying to take a walk with such a dog in Manhattan!

The thing to do is teach the dog not to leave a curb unless it hears you say “Okay.” I call it a passive command because I do not tell the dog to “Stay.” I simply step off the curb saying nothing to the dog, and the dog doesn’t leave the curb until she hears me say “Okay,” even if I’m half way across the street. I’m presently working on that with my newly adopted 15-month-old standard poodle, Paula, and it’s not easy.

Dear Dogfather,
We are a couple who own a home on Martha’s Vineyard. We are ready to retire and plan to live full-time on M.V. We are ready to rekindle our love for dogs. How would you suggest we approach a visit to the local animal shelter? Are there questions we should ask or pointers you can suggest to determine intelligence, temperament, and overall positive results?
Arnie and Irene

Dear Arnie & Irene,
Don’t you hate those people who answer your question with a question? Well, right now that’s me. I can’t even begin to estimate how many times I’ve been asked, “What kind of dog should I get?” or “What’s the smartest dog?” As to smartest dog, it’s a question of how one defines “smart” when it comes to dogs. Let’s say I take two dog crates and I put a poodle in one and a husky in the other one. But this poodle is no ordinary poodle. He knows more tricks than Penn and Teller and would make Rin Tin Tin and Lassie look like dummies. As for the Husky, he doesn’t know his name and has no clue as to what come or sit means. I leave the dogs in their respective crates with no water or food and walk away — for two weeks. When I return the poodle is dead of starvation, but the Husky is nowhere to be found. He somehow escaped. Who’s smarter?

To me, the key about dog smarts is its desire to please and cooperate with us Homo Sapiens, and how quick they are on the uptake.

As to what kind of dog you should get — here are my questions. Big or small? Do you want a dog you can put under the airplane seat and take traveling with you or something you can wrestle with? What about shedding? You could make a down comforter from the fur of a Newfie when it’s blowing its coat, not to mention the drool factor. Ever see a Mastiff’s viscous waterfall form a small pool while you’re serving your guests appetizers? If you live in a small campground house like me and your large dog has a flatulence issue you’ll find yourself renting a room at Isabelle’s Beach House until the air clears.

Next comes age. Granted, puppies are real cute, but they also make real poop and real pee and have to be housebroken, in addition to dealing with mouthing, destructive chewing and eating everything from your underpants to your eyeglasses. There are so many older dogs that need homes and will harmonize with you a lot quicker than a puppy.

How about sociability? Any grandchildren? How does it get along with kids or toddlers, or other dogs?

What about your lifestyle? Are you couch potatoes who want a dog to share your couch, or extreme joggers who want a four-legged companion when running? Island living often entails lots of “water stuff” — beaches and boats. If you’re into that stuff you might want a dog who loves to swim.

When looking at a dog to determine its temperament, what you want is middle of the road. Skip over the boldest and most shy. If it’s small enough, see if you can cradle it in your arms like a baby. That’s pretty important. If you squat down and make baby sounds it should come to you.

Here’s another reality. Take a new dog home and he or she will probably not present its real personality for a couple of weeks. It often takes that till the newcomer is relaxed enough to reveal any idiosyncrasies it may have.

I’ve dealt with many “mismatches” over the years — for example, the 80-year-old couple who buys the cute cuddly fur ball puppy at the pet store that matures into an 80-pound Akita, causing the owners to go airborne when it pulls on the leash.

So, A and I, give some thought to the questions, write me when you’re ready and I’ll help you pick out a new four-legged significant other, or check it out after you adopt.

Have a question for The Dogfather? Send them our way: onisland@mvtimes.com. Subject line: Dear Dogfather. 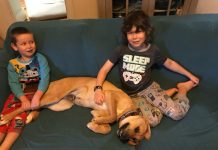