A Lambert’s Cove couple has spent 40 years collaborating on their work at home — doing everything from perfecting piano mechanisms to creating bracelets you can throw in the compost heap (not that you’d want to).

“Eleanor and I have spent our lives trying to get to the essence of things,” says David Stanwood, an inventor in the field of piano technology. His wife of 40 years, Eleanor Stanwood, is an artist who works with wool.

“It’s fun to feel we’ve unlocked a Rubik’s cube,” he says, “that we’ve accomplished something with our work.” He notes that there is a significant connection between the mediums in which they work – pianos and wool. “Pianos evolved with the use of wool felt as a material in their construction and functioning. Felt has the highest regain of any fiber – when you crush it, it springs back to about 90% of its original loft. Other fibers don’t do that. But wool always remembers how it was when it was on the back of the sheep.”

The Stanwoods are problem solvers. While working in sheep farming in California in the late 1970s, Eleanor was dismayed by the wasting of wool on farms raising sheep for meat only. Recognizing that wool was a renewable resource, she found a way to process the “waste wool” into a durable, springy batting that could be used to stuff comforters and other products.

One of the first problems David recalls solving was when, as a little boy, he was disappointed to learn that a piano teacher had said she was unable to take him on as a student. “I had my mother call the teacher and hold out the phone while I played a song for her. When I finished, she said, ‘OK, I’ll work with you.’”

“If someone says something can’t be done,” says David, “then they’re probably missing something, and that’s where I want to go. It’s worked for me my whole life.”

When the couple moved to Martha’s Vineyard in 1981, people told David, who was then tuning pianos for a living, that he’d never find enough work here. This proved to be untrue, and Eleanor, too, soon found herself more than adequately busy after receiving an order from the Harborview Hotel for over 100 wool batting-stuffed quilts. Collaboration is a constant with the Stanwoods, and several of the quilts bore a stenciled compass rose pattern that David had designed.

At that time, David and Eleanor were both working in a two-story studio they built behind their West Tisbury house. The first floor was David’s piano workshop, and the second floor Eleanor’s wool-working space. David describes the building with obvious fondness, noting that it was built entirely traditionally (no plywood or other shortcuts), that its footprint is the Golden Mean, and that its 13’ roof pitch is one he’s never seen elsewhere. “Usually it’s 12’,” he says, “but 13 is our lucky number; we were married on Friday the 13th.” He adds that both the workshop and the main house are situated so that on the summer solstice, they face the setting sun, and on the winter solstice the rising sun. “It’s very special, this place,” he says.

In 1992, David did a trade that changed his life. Pat Gregory of Educomp, who had a piano that needed tuning, convinced David that he needed a computer. David began using the computer for recording and graphing measurements of the components of piano actions.

In 1994, after a couple of years of studying the graphs and noticing patterns, David developed a mathematical equation that ties together all the weight and leverage characteristics of a piano’s mechanics, enabling a level of fine-tuning of the instruments that had never before been possible. “That equation broke everything wide open,” he says. “It’s not rocket science, it’s see-saw science; it’s algebra. By applying a simple methodology to pianos, which everyone thinks are complicated, I’ve taken something that’s very complex and turned it into something that’s simple.” Patented as “Precision Touch Design,” David’s methodology has spread around the world, as has his 2009 invention, Stanwood Adjustable Leverage Action, which allows a pianist to turn a knob to shift the pivot point of all the keys simultaneously, without interfering with the piano’s normal functioning. (“It changes the relationship between the pianist and the sound,” David explains, “and the sound changes.”)

Over the years, both Stanwoods’ work has evolved and changed. Eleanor went from making batting-stuffed quilts to making felt, then on to creating dyed and appliqued felt jackets, shawls, and scarves. Now, she’s fashioning jewelry from wool, dying and molding compressed wool circles into shaped bracelets and earrings. But the ethics behind her output are unchanged: “It’s totally sustainable,” she says of her jewelry. “You can throw it on your compost pile.”

David has gone from tuning pianos to tuning piano actions via his patented technique. He does most of his work by email: people he’s trained in his technique send him measurements, which he analyzes and reprocesses to specifications, and returns the customized results. He also travels, both to teach and to work on very high-end pianos. But when he’s home, he’s no longer in his workshop; he’s in the house, on the computer, generally in his library, where it’s quiet.

As Eleanor’s creations have gotten smaller in size, the need for her large, open workshop space has also declined, and now she, too, works in the house. “I have good light here,” she says, “I have a washing machine” (for turning batting into felt). “We could have put water and everything into the workshop, but I really like being at home.”

The house they originally moved into was very small – a two story (one room per floor) structure dating to 1840. It was moved to Lambert’s Cove Road in 1944 from the up-Island end of West Tisbury-Edgartown road, where for some time it had served as the doctor’s office of Nancy Luce’s uncle. The people from whom the Stanwoods bought their property in 1981 had built on a small addition, but still, the place was more than cozy. The Stanwoods eventually added to the structure themselves, creating a two-story addition, the downstairs of which is where most everything in the house takes place. A single, long, open room incorporates the kitchen, a dining area, a sitting room, and space for David’s piano.

When David plays the piano for Eleanor, she lies on the sofa and he unplugs the refrigerator and turns off the furnace. “I’m inclined toward quiet,” he says, “because it helps creativity, not only in my piano playing, but also with inventing. One of the dangers of modern life is that there’s too much distraction. But winter here on the Vineyard is a space itself, a quiet space, a distraction-free space, which is important to both me and Eleanor. We revel in the quiet of the Vineyard in winter. It’s a special season, a precious time.”

Eleanor gazes out the windows that line the back side of the addition she and David built, overlooking a meadow where sheep used to graze. Now, a new season is arriving, and chickens scuttle about, enjoying the warmth of an early spring day. 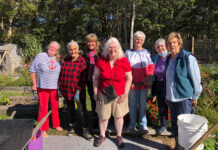