The long-range forecast, for a protractedly chillier spring, has scored on accuracy so far. “What happened to my hydrangeas?” is the question heard everywhere Island gardeners congregate.

At some point in early mid-May, a temperature drop, well short of freezing but of sufficient severity, cold-shocked hydrangea bushes’ canes. Nicely cleaned up, pruned ones were hit harder, lacking the old wood protection. The result is a green froth of new growth at the plants’ bases, and brown, shriveled buds on upper canes, which were viable when pruning commenced.

These cold-shocked hydrangeas won’t die but may be devoid of most bloom until late in the season. Cultivars that bloom on new wood, such as ‘Endless Summer,’ were developed to provide bloom despite such events.

This is a demonstration of the weather’s trumping our efforts to get everything cleaned up and ready for the season in a timely fashion. Diligent gardeners throughout the Island have seen their industry “rewarded” by the cold-shocked buds. Mophead hydrangeas were the ones most affected, but lacecaps, such as my variegated ones, and some buddleia were also hit.

A flower of the spring woodland, Mayapple (Podophyllum peltatum, in the Berberidaceae) is a unique plant. According to Wikipedia, the genus Podophyllum contains six species. Just one, P. peltatum, is native to North America. Mayapples do not seem to have been native to the Island, or perhaps were eradicated during earlier times of deforestation. I had never encountered Mayapple until I went away to school in Pennsylvania.

Eventually, Mayapples were introduced here, most likely by members of the Martha’s Vineyard Garden Club and Nelson Coon. They are colonizers, growing from a single root, and make a stately and distinctive groundcover in gardens with space to let them increase. They look charmingly very like umbrellas, both upon emerging from the ground in the furled state and after fully opening on tall, straight stems to their typical parasol-like habit. They make a bold statement in the haze of spring green.

Asian species of Mayapple are available, one of which, P. pleianthum, is sold on the Island. The leaf is less lobed and of a shiny, bright mid-green.

Bill Cullina has quite a lot to say about the plant in his guide, “Wildflowers” (New England Wildflower Society, 2000, a book well worth having). He describes the plant as clonal and therefore self-sterile, meaning that the “apple” is unlikely to form, or will be free of seeds, unless cross-pollination occurs. If fruit forms, it is relished as food by box turtles, which then distribute the seeds.

Having recently heard via a friend about foraging Mayapple for culinary purposes, I wish to issue a warning about this plant. While Cullina says that care must be taken to eat only fully ripe fruit, Turner and Szczawinski in “Common Poisonous Plants and Mushrooms of North America,” (Timber Press, 1991) state that all parts except for “fully ripe berries (my emphasis) are considered violently purgative.”

They continue: “Mayapple has been used in Native folk medicine for centuries, and over 100 years ago found its way into American material medica. It has been used to treat cancerous tumors…. Unfortunately, the satisfactory use of Mayapple resin against cancer has been complicated by its toxicity.”

Enjoy this striking plant in the shade garden, where there is room for it to form colonies. It increases easily from rhizome pieces cut into eight-inch pieces and once established can grow in poor, dry conditions, but please leave the apples for box turtles to eat.

On the subject of poisonous plants, many treasured garden plants, both common and rare, are poisonous. Be aware, but do not boot them out of the garden for this reason! (Many herbal medicinals also possess a toxic or poisonous aspect, manipulated in practice by knowledgeable herbalists.) Examples from among many indispensable garden plants are narcissus, lily-of-the valley, delphinium, yew, and rhododendron.

It is not too soon to begin an application program against blights and diseases of tomatoes. I encountered an experienced gardener friend whose tomato plants were exhibiting signs of the leaf-blight, septoria. While this seemed early for septoria to manifest, his plants were started in February. We ran down the usual list of steps he had taken to quell the outbreak, and he’d done all the more “natural” ones. He had a container of sprayable copper compound in his hand.

The above notwithstanding, many diseases or insect pests are plants’ reactions to stress. Consider the possible sources of stress: hours of sun/shade; temperature; soil imbalances/insufficiencies; cultivation techniques; over-dry or over-wet; over-feeding or starved. Each garden is different and unique, while simultaneously it can be said: all gardens share the need for good culture.

Reach for the “nuclear response” solution only after you have tried the others, because all gardens also share the need for pollinators. The welfare of soil and insect organisms is just as critical to garden needs as producing the blemish-free peach.

A recent post from Renee’s Garden, the seed company, singles out six insect groups that are particularly beneficial in the garden. They are syrphid flies (“sweat bees,” “hover flies,” or “flower flies”); bumblebees; parasitic wasps; lacewings (“aphid lions”); tachinid flies; and of course ladybug beetles. If you would like to read more about these insect groups, how they help, and how to attract them, please link to reneesgarden.com/articles. The article is full of interesting information, such as the discovery that the nectar of sweet alyssum is particularly attractive to syrphids.

Pay attention to staking, pinching, and sowing succession crops. Succession crops would include more of the same, as well as new, crops that move into spaces left by harvesting of earlier ones. Remove flower stalks of bulbs, rhubarb, lovage, and sorrel. 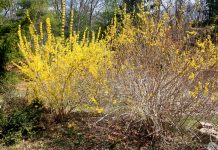