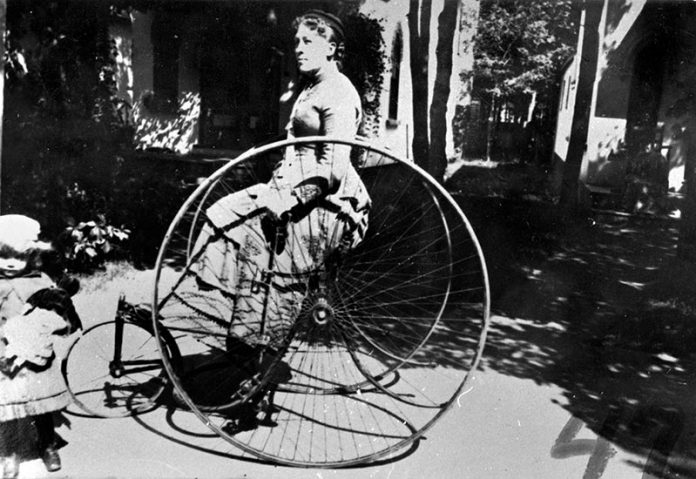 The 1880s was the decade of tricycling, but as this unidentified Cottage City tricycler demonstrates, these were not childrens’ toys. A tricycling craze, started in England, had summer visitors to the Island completely in its grips for more than a decade, as bicycle and tricycle races became part of Cottage City’s annual “carnival of athletic sports” in the weeks leading up to the final illumination. At least one tricycle rental shop — sometimes referred to as the “tricycle stable” — was located prominently on Circuit Avenue.

One newspaper reporter observed in July 1885, “The number of bicycles and tricycles which have been brought to the Vineyard this season is simply enormous. Several hundred machines are already in use on the Island, and more are arriving by every boat. Nearly every young fellow in town has brought his wheel with him, and tricycling is fast coming into favour with the ladies. The roads here, being entirely of concrete, furnish excellent opportunities for the use of the machines, and the riders of the silent steeds fully appreciate this fact.” Another Cottage City visitor added in 1887, “Tricycle riding seems to be very popular with the ladies. The concrete streets are delightful for such exercise and a dozen or more ladies may be seen at almost any time in the morning or early evening gliding through the streets. Each carries a colored light in the evening and as the riders go darting around the effect is a pretty one.”

While most popular with women, it was not exclusively so. In the summer of 1887, three famous international oarsmen — famed previously for their sculling rather than their tricycling — squared off in a memorable ten-mile race: 140 laps around the Cottage City Casino in “rowing tricycles” — a sort of recumbent three-wheeler also referred to as the “roadsculler.” Rowers Wallace Ross, George Hosmer and John McKay launched their tricycles in front of a large Vineyard crowd to vie for the $300 prize. Ross was declared the winner, and entered the record books for having rowed the “almost incredible distance of ten miles in thirty-nine minutes” on his tricycle.