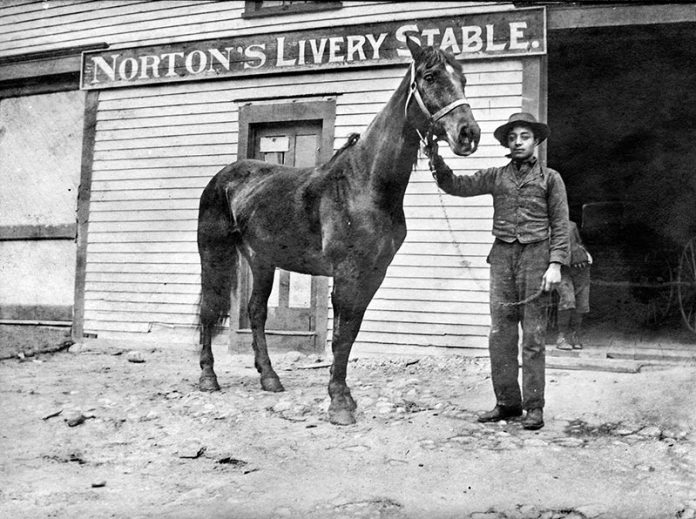 Stable boy Willie Davis stands in front of Norton’s Livery Stable — now occupied by the Bunch of Grapes bookstore — circa 1905. The building was built just after the great 1883 fire by brothers Bayes and Leavitt Norton. The Norton brothers advertised excursions to the Vineyard Roller Skating Rink (sixty cents, including admission and skates), and delivered steamer passengers from the West Chop Wharf to Cottage City on their party wagons “Star” and “Moorlight” (ten cents fare). Their company delivered the mail to Cottage City, and were hired to move houses. The stables housed the town’s fire department for a period, and about the time this photo was taken the company was charged with transporting children to and from the Tisbury School. With the arrival of automobiles on the Island, the business slowly transformed from a horse livery into a car rental agency and riding school, and eventually into a taxi stand and shuttle bus service.

Ultimately employed as a chauffeur, Davis lived with his mother, Clara, a former slave from Maryland, in a little house adjacent to what is now the Steamship Authority’s parking lot. It was later moved to Look Street. He married a young Jamaican woman who had moved to town to work as a domestic servant, but he died shortly afterward at the untimely age of 36.