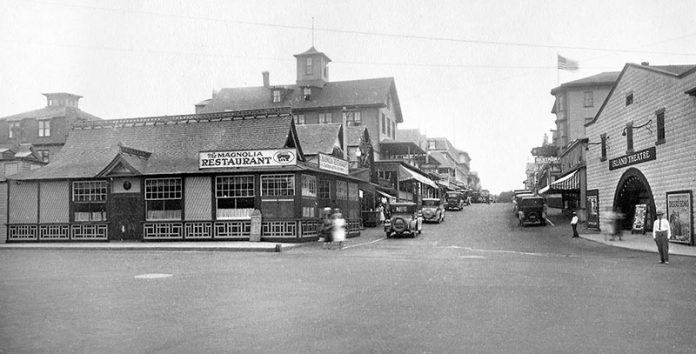 Before Giordano’s brought Italian-American food to the foot of Circuit Avenue, the Magnolia Restaurant served steamed and broiled “live” lobsters and fish dinners to hungry Oak Bluffs diners during the 1920s and 30s. “We Serve Seafood” announced their signs (seen in other photographs) visible halfway to the harbor.

But have you ever wondered why an Italian restaurant has rooflines which evoke (sort of) traditional Japanese architecture? The building inherited its unlikely construction from its 19th-century owner – Macy’s, the Asian-themed souvenir shop which sold Chinese lanterns and goods as well as tennis shoes and postcards. Macy’s eventually became Dawson’s Lunch Room before the Magnolia opened, and in 1943 Wilfred Giordano Sr. bought the Magnolia from Walter Perkins in order to move his father’s restaurant here from the Pawnee House up the street.

Across Circuit Avenue, the Island Theatre opened in 1915 as the “Eagle Theatre” under the management of Vineyard Haven dry goods merchant Allen P. Eagleston. Although moving pictures had been popular here for well over a decade in a variety of venues, the Island is considered the Vineyard’s first modern movie theater.