This is a season of many beautiful but ephemeral vignettes in gardens and Island landscapes. Hostas aging to tawny golden mounds, backlit flowering grasses, unexpected flashes of scarlet and crimson vines and branches against blue sky — the light changes or the leaves fall and that’s it, gone forever!

Sustainable gardening may mean leaving perennial beds standing, instead of cutdowns. Seedheads, especially those of the Compositae, support much wildlife over winter.

Seasonal change seems to mean we are finally receiving ample rainfall. This does not mean that recently planted trees and shrubs are not at a deficit going into winter, since much desiccation and damage has already occurred. Deep watering, mulching, and for evergreens an anti-desiccant spray are measures to take to ensure survival and avoid winterkill.

A small-scale debate appears to have arisen concerning hummingbird feeders and when to take them in. One argument is for removing them around the third week of September, to discourage the tiny birds’ hanging around because they have a source of energy, when they should be leaving to migrate to their southern ranges.

The other viewpoint is for leaving the feeders up (clean and freshly stocked, of course), to provide welcome energy supplies for stragglers arriving here from farther north. The difference may even depend upon your Island location, relative to migration routes. I have not noted any hummingbirds at my house since mid-September and have taken in my feeder.

Lords of the autumn border

Typically Montauk daisies are glorious over Columbus Day weekend — a farewell salute to summer. The Montauk daisy (now Nipponanthemum nipponicum, after several binomial name changes) is indisputably one of the most attention-grabbing flowers of the late border. Falling somewhere between a shrub and an herbaceous perennial, it is a magisterial plant, clumps typically two to three feet high and wide, with over-sized flower trusses to match.

Montauk daisies are well suited to Island gardens and make an ideal seaside garden plant. They thrive in sandy soils in full sun locations and tolerate salt well. They are not prone to deer and rabbit damage. In locations with overly rich soil the plants make green growth at the expense of flowers and tend to sprawl with open crowns. Manage that by repeated pinching/shearing (until mid-August at the very latest) to promote bushiness, and by unobtrusive staking if necessary. Apart from this pruning, and annual cutting back of the previous year’s growth in early May, Montauk daisies are carefree, hardy plants.

Montauk daisies stand out due to their bright whiteness and may make nearby flowers look mousey in comparison. Suggestions for perennials to mix with Montauk daisies include those with bold color or texture that enjoy similar sunny, well-drained conditions: asters, lamb’s ears (stachys), ornamental grasses, sedums, nepeta, rudbeckia, caryopteris, garden ’mums, seaside goldenrod, and butterfly weed, to name a few.

Readers may recall my announced intention to promote the American Painted Lady butterfly by allowing larval feeding on the foliage of Helichrysum petiolare, the licorice plant, in my terrace pots. I’ll report on what happened.

The pots also included ‘Queen Sophia’ marigold and Verbena bonariensis. I did get munching and webbing on the helichrysum foliage, up to a point, but to an extent that was disappointing and barely disfiguring. I had been prepared to make the supreme sacrifice of tattered looking pots in the service of butterfly propagation! Nothing much seemed to be happening, and eggs, if indeed they were being laid, did not seem to develop compared to pots I had cared for in other gardens.

Finally, in August, I spotted two small black, hairy caterpillars! Whether they pupated, or were picked off by bird predators or hens, I do not know, but I lost track of them. In the end, some element of what the butterflies needed to reproduce strongly was lacking, even though I had provided plants with felted leaves that had proved appealing in other locations.

Did the marigolds or verbena exert a repellent effect? Possibly, but my best guess is that the pots are not located in sunshine that was strong and warm enough. When the American Painted Lady is fluttering over sandplain habitat and selecting pearly everlasting plants upon which to deposit its eggs, it is in a sunny, open, hot and dry setting. My terrace didn’t pass muster as sandplain habitat.

Leaf harvest begins. Do a little raking every day and keep accumulations to a minimum, especially while lawns are still in active growth. Wet packed leaves on lawns create dead spots that are easily avoided by frequent cleanup. Create a leaf storage container, wire cage, or other means of holding onto the leaves; they are one of nature’s best soil amendments — good stuff! Piles can be run over with the lawn mower, giving you a product that breaks down more quickly and which can be used ultimately on flower beds, vegetable gardens, or to mulch trees and shrubs.

Be prepared to bring houseplants inside; nights are becoming chilly even though sunny daytime temperatures warm quickly. Plants may be cut back to make them more manageable, and some, such as geraniums, can be dried off and stored for the winter in an unheated basement or other frost-free place. Or, cuttings can be taken. They won’t grow much over winter but will give fresh new plants for next season.

It is premature to dig and store dahlias; the experts say the tops should be blackened by frost and left in the ground for a while to promote tissue changes that enhance keeping qualities of tubers. When that does happen, though, the tubers may be washed and divided (the method recommended by Swan Island Dahlias) or, my more casual “dig ‘n’ store” with dirt clinging, in feed bags or plastic ones that potting soil comes in. Whichever way you do it, be sure to identify the tubers by cultivar. 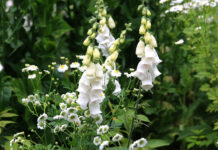 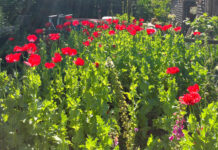