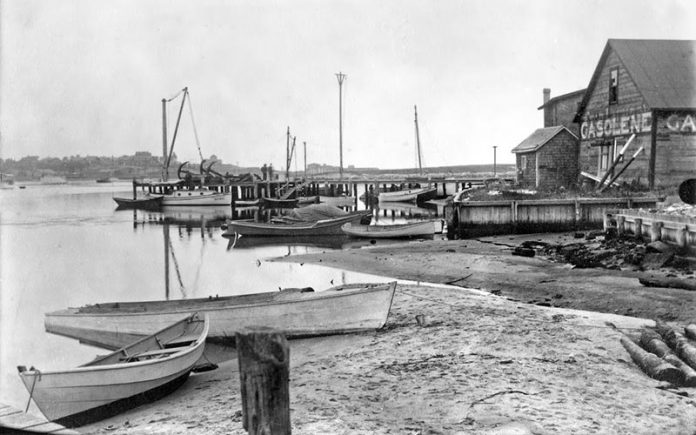 The Oak Bluffs harborscape of the 1920s is almost unrecognizable today. The photographer of this image was standing about where Nancy’s Restaurant & Snack Bar is now located, between Church’s Pier and Dockside Marina. The “gasolene” station on the right is roughly in the location of the modern Sand Bar & Grill.

Tom Williston, who operated both the gas station and the pier for several decades, immigrated as a child to the U.S. from New Brunswick before the turn of the 20th century, and ran an auto dealership in Lowell for many years, before moving to the Vineyard at the end of the first World War. Here he vulcanized tires, sold auto supplies, repaired vehicles, and sold gasoline (for less than 25 cents per gallon.) The low, white vessel tied up at end of the pier is the Helen of the Volunteer Life Savers Patrol, a vestige of the Massachusetts Humane Society’s movement to save the lives of shipwrecked sailors, eventually superseded by the U.S. Coast Guard. The Hy-Line began ferry service here in 1971.