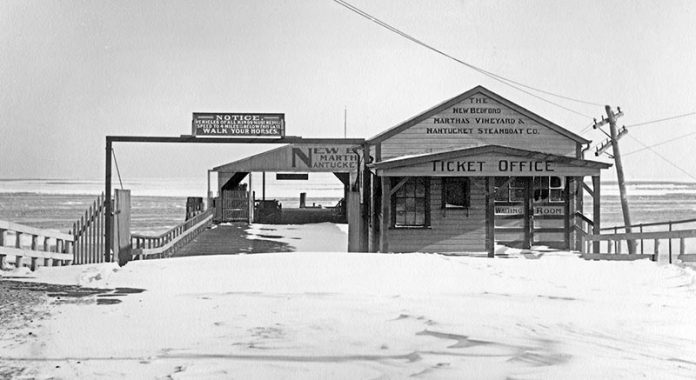 The Oak Bluffs steamship office notice in this circa 1920 photo reads “Vehicles of all kinds must reduce speed to 4 miles per hour below this gate. WALK YOUR HORSES.” Nearly 600 horses were counted on the Island in an 1893 animal census; but after the first automobile arrived on Martha’s Vineyard in 1900, the face of the Island would never be the same again.

By 1916, there were 266 automobiles registered on the Island: 86 Fords, 58 Buicks, 25 Maxwells, 10 Cadillacs, and 87 miscellaneous other models representing some 40 other manufacturers. By 1922, there were 681 cars on the Island, and by 1936 there were 6,000. Today, the Steamship Authority frowns upon walking one’s horse onto the ferry at any speed: a representative confirms for the record that they currently have a strict “no horse-drawn carriage” policy.