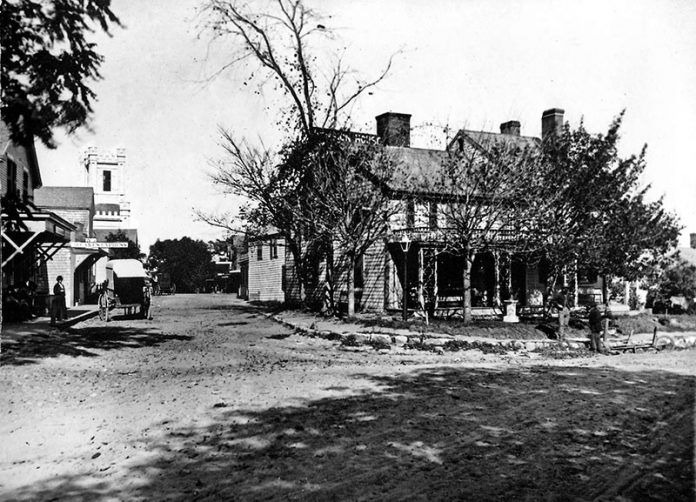 Captain Jane and the Mansion House

The original Mansion House was opened in 1800 at its present location in downtown Vineyard Haven by Connecticut physician Rufus Spaulding. It was evidently cobbled together from two 18th-century houses, one of which the enterprising doctor had moved here from Lambert’s Cove. Soon tiring of the innkeeper’s life, Dr. Spaulding swapped his property with next door neighbor Jireh Luce, who in turn sold the hotel to his brother Timothy as a tavern.

It’s Timothy’s wife Jane who is best associated with the Mansion House of the 1820s and 30s. Nicknamed “Captain Jane” and admired for her “natural ability for business,” Mrs. Luce maintained the inn for two decades and ran a store in its northern end. Local author Charles Hine wrote of the misfortune of James Bassett, one of the last of the original down-island Wampanoag landowners: “James in an evil hour allowed himself to become indebted to ‘Captain’ Jane Luce, who kept the Mansion House, kept a store and fitted out ships. Captain Jane was business from the ground up, and when the Indian failed to pay up she took his property without troubling herself as to legal forms.”

The great fire of August 1883 completely destroyed the hotel, together with every other downtown business and building on both sides of Main Street, including the white Baptist Church visible on the left. Only one old black walnut stair rail survived the fire; it was incorporated into the rebuilt hotel. The second hotel stood here for more than a century before it, too, was lost to fire in 2001.