stories will be told

which, even if lies,

will resemble a life.

Stories — the same old one:

a man has nothing yet

in the sheath of his body

a yearning, a bountiful

for awhile, reminds him

of the sunlit sweat

from which he rises

the lake below, the woman

A resident of the dank and moldy primal forests of West Tisbury for 32 years, Lee H. McCormack has been occasionally reported as actually being seen alive, usually from a great distance through high ­octane vision ­magnifying devices.

The Martha’s Vineyard Times welcomes contributions to Poet’s Corner. Dan Waters, former poet laureate of West Tisbury, will select poems to be published here. Submissions should be directed to dan@indianhillpress.com. 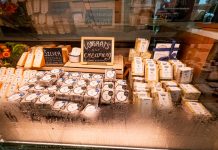