The Martha’s Vineyard Regional High School (MVRHS) varsity sailing team did well, but came up short, in the O’Day fleet qualifiers and finals on April 25 and 26 at Tabor Academy and Saint George’s, respectively.

Saint George’s School of Newport hosted the O’Day finals at the Ida Lewis Yacht Club. Raz Sayre and Margaret Jobba-Woodruff sailed as partners in the A division. Eli Hanschka was paired with Emily Moore, and Charlie Morano was paired with Ellie Reagan in the B division. Both A and B divisions sailed seven races each, for combined scores resulting in a sixth-place finish. Only the top four finishers move on to compete for the Clipper Mallory trophy at Nationals.

“They sailed well. I have no complaints,” said Head Coach Andrew Burr.

Saturday the Vineyarders host Nauset High School, Lincoln-Sunbury of Boston, and Tabor Academy in a four-way contest. Sunday the team travels to the Coast Guard Academy to compete in the Connecticut State Championship, which they were able to enter through a lottery system. “It’s such an amazing venue,” said Mr. Burr. “I applied, and we were lucky and got in.” 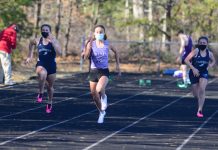 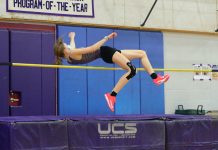 Indoor track off and running 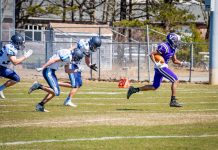