The Vineyard women sailors also competed in Herreshoff Trophy competition in a fleet-racing event Saturday, a qualifier for the Women’s New England Championship. The ladies placed fifth, which qualified them for the finals at MIT last Sunday. The ladies then finished 11th out of 14 teams, but “it was a terrific experience for the girls,” said Head Coach Andrew Burr.

The varsity sailors have qualified for the Mark Trophy competition, as they are ranked number six in New England, and the number one public school. Only the top eight are invited to compete. MVRHS and Duxbury High School are the two public schools representing the region at the Mark competition.

The team is gearing up for this weekend’s New England championship. Barnstable is hosting the event out of the Hyannis Yacht Club Saturday and Sunday. A double-round-robin format is planned, and the top two finishers move on to nationals, to compete for the Baker Trophy over Memorial Day weekend in Chicago.

“We’re well positioned, but it’s anyone’s day to have,” Mr. Burr told The Times Wednesday. “All eight teams are capable of winning it, it’s just who executes better on Saturday. I have no question these guys can qualify for nationals.”

Cleared trees to be replaced along O.B. roadwork 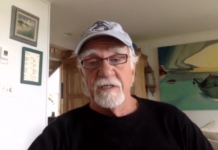