The much-anticipated opening of the new Whitney Museum of American Art in lower Manhattan has attracted thousands of visitors to a large-scale show featuring many works from the museum’s permanent collection. Among these is a painting by Thomas Hart Benton called The Lord Is My Shepherd. Mr. Benton summered for 50 years on Martha’s Vineyard, and painted many scenes of the Island and the Vineyard community. The Lord Is My Shepherd is one of these. It depicts an elderly deaf couple, George and Sabrina West, who were friends of the painter and members of the Chilmark deaf community.

It seems Thomas Hart Benton chose local subjects for his painting to depict ideals central to the American Regionalism art movement. As noted in the Whitney Museum’s audio guide segment about the painting, “They [the deaf couple] become symbols of the old-fashioned rural values that Benton championed. The man and the woman stand for faith, hard work, temperance and endurance, the qualities that Benton believed were the cornerstones of the American way of life.”

During the 19th and early 20th century, there was a large population of deaf people who flourished on the Vineyard for years. The deaf community was centered in Chilmark, and more specifically Squibnocket. At one point, one in 25 children in Chilmark was born deaf, and one in four in Squibnocket.

The Chilmark deaf community is well known among scholars and institutions dedicated to the deaf, partly because of its role in the development of American Sign Language (ASL). The Chilmark residents developed their own form of sign language, known as Martha’s Vineyard Sign Language (MVSL), which later merged with mainland signs to form ASL.

Early settlers of Martha’s Vineyard carried the recessive gene for deafness with them from the Kentish Weald area in England. The deaf population thrived on the Vineyard into the 20th century, but eventually died out, as younger people started leaving to attend schools for the deaf off-Island, and the gene pool was further diluted by an influx of new families settling on the Island

On Saturday, May 23, writer Jack Schimmelman will present a talk about the Chilmark deaf community at the West Tisbury library. Mr. Schimmelman has done a great deal of research on the topic in the course of writing a folk opera based on Vineyard history.

This will be the third in a series of talks by Mr. Schimmelman, focusing on topics covered in the theater piece that he is developing along with composer Jesse Wiener. The opera, titled 1854, focuses on a number of issues of the time, including slavery and abolitionism, the roles of the Wampanoags, the African-American community, and the deaf inhabitants of Martha’s Vineyard. His previous talks focused on race and racial relations on the Vineyard.

In a phone interview with The Times, Mr. Schimmelman, who has lived on the Island for more than four decades, talked about his interest in the historical deaf community.

“The reason it really captured me was a feeling of the unique nature of the Vineyard community as a whole; the fact that this community was fully accepted as a component of the greater community. They were never looked on as being disabled. They were looked on as individuals. I’ve always felt that way about the Island. This has allowed me even further insight into what makes the community special,” said Mr. Schimmelman.

He continued, “A lot of people voluntarily learned sign language because they were working alongside one another. They were doing business together. They were fully integrated into the community.”

Mr. Schimmelman conducted a great deal of his research on the subject with the help of the staff of the Martha’s Vineyard Museum. He found two interviews by oral historian Linsey Lee with descendants of members of the deaf community to be particularly helpful. He is basing all the characters in his opera on historical Island figures.

Mr. Schimmelman, who currently writes a blog for the Huffington Post, has created a number of multidiscipline pieces throughout a long career in theater in New York City. “I create basically performance pieces for ensemble,” he said. “My influence goes back to the Open Theater.” His folk opera 1854 will incorporate songs, choreography, and design. It is a site-specific piece, written to be performed at Oak Bluff’s Union Chapel. Mr. Schimmelman hopes to produce the piece for the first time this September, if he can raise the necessary funds.

While it is focused on a town meeting in which the issue of abolitionism is debated, a number of elements of the early years of European settlement on Martha’s Vineyard are incorporated into the piece, not the least of which is the presence of the deaf community, which the author sees as representative of the Island’s nature of acceptance and adaptability.

Discussion on the Martha’s Vineyard deaf community with Jack Schimmelman will take place on Saturday, May 23, at 1 pm at the West Tisbury library. Sign language teachers Elyse Bonnell and Lynn Thorp will also participate in the discussion. The event is free and open to the public. 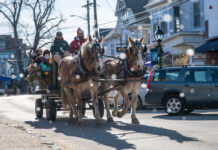 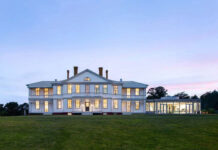