Kanta thanked the Hebrew Center for all of their support and willingness to host the evening. We learned from Rabbi Caryn Broitman about the American Jewish World Service, which has been active in Nepal for many years, and why this is such a great relief organization. To donate or learn more, go to ajws.org.

Another surprise was Nikeya Tankard, an Island third grader, who arrived at the event with her family because she had something to share. Before dinner Nikeya, whose mother is Nepalese, stood before the packed room, spoke clearly into the microphone, and told us she had made and sold bracelets to raise funds to help Nepal. She told the crowd she wanted to donate the $300 she raised to the evening’s charity.
Vineyard Haven resident Adrian Smith had been invited to the event via Zee Gamson and his neighbor Arnie Reisman. Adrian first went to Nepal in February 1998, right after college. His relationship to the country has only deepened since that time: He speaks the language, has studied stone carving in Nepal, and is based in Kathmandu to lead student study semesters. Adrian spoke about being in Kathmandu when the earthquake happened, and getting to Chaukati, the village where he spends two weeks with each group of students during their semesters with him. He and friends managed to get 10,000 pounds of goods donated, and a truck to haul it, arriving exactly one week after the initial quake.
The first person he saw was the village head, Man Bahadur Thami (which means “Brave Heart”), with whom he has lodged during his stays for the past 15 years. He asked, “How are you?” Man Bahadur answered calmly, “At rest. Everyone is at rest. And so are the buildings.” Then they laughed. Adrian explained to us that for the people of Nepal, things could have been much worse, and they all recognize this. The earthquake happened on a Saturday, a day the nearly 20,000 schools were closed. It took place during summer, so no one would freeze by losing their homes. And it happened during the daytime. You can learn about what Adrian Smith and his friends are doing by following their Facebook page, Nepal Earthquake Relief — Sindhupalchowk. 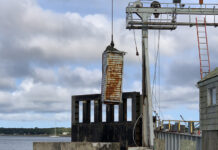