Edgartown’s Willoughby Gallery owner Rick Willoughby calls September and October “adult time.” “All the kids are back in school,” he says. “The Island has a slower pace, and the collectors start showing up.” That makes the fall shoulder season his busiest time at the salon-style gallery, where walls practically burst with paintings, often framed in gilt. He sees lots of clients in their 50s and 60s who now have have the disposable income to be able to afford art.

With a roster of between 15 and 20 artists, Willoughby displays work that is best described as traditional realism, although it often has a lot of abstract qualities. Many of the artists represented have been with the gallery 18 or 20 years, almost as long as the 22 years the gallery has existed. Its most popular artists are Elizabeth Wadleigh Leary, Nadia Mahfuz, and Sean Farrell. Although each specializes in still lifes, their work is dramatically different. Ms. Leary paints in acrylic, using a muted palette of earth colors layered with monochromatic washes. She creates exquisitely detailed portraits of shells, rocks, a Native American basket. Even a single leaf may be worthy of this artist’s attention. Her interest in architectural forms led her to work with Walter Gropius at the Cambridge Artist’s Collaborative, and she was also a graphic designer for NASA at the Harvard College Observatory. Her paintings may single out architectural elements of buildings, whether a window, the intricate work on a porch, or a house with one of its second-floor windows glowing in a misty light.

Nadia Mahfuz, a member of the Guild of Boston Artists and the Copley Society, arranges the subjects of her paintings with the color and lighting of a Dutch master. One still life, “The Unknown One,” places rope, wood, and a steer skull together with haunting evocativeness. Her most recent work focuses on arrangements of cloth that capture the beauties of texture and substance. It is an unusual and distinctive subject for a painter.

Sean Farrell’s brilliantly colored and often large paintings dominate a room. Mr. Willoughby tells the story of one buyer who had been looking for a still life of sunflowers. After he suggested that the client check out one of Mr. Farrell’s dramatic rendering of the flowers, she and her husband were so mesmerized that they missed their ferry — and bought the painting. The Connecticut resident has received a lifetime invitation to exhibit at the Florence Biennales in Italy, and has received numerous awards from Boston’s Copley Society.

“I don’t take on a lot of new artists,” says Mr. Willoughby. One who most recently joined the gallery is Ithaca, N.Y., artist William Benson, and five of his marine paintings of sailboats are on exhibit. Both Mr. Willoughby and his daughter Sherry are artists, with many of their landscapes and seascapes displayed in the gallery alongside the gallery’s many other artists.

The Willoughby family dates back to 1840 on-Island, and Mr. Willoughby, whose full name is Eldon Kendrick Willoughby II, was for many years a scalloper working out of New Bedford. Although he says he is not a sport fisherman, he still likes to catch squid or oysters and prepare them for friends and guests. His lifelong talent as an artist is evident from the pencil drawing of Winston Churchill done at age 12 and a charcoal portrait of Lyndon Johnson at age 15.

The Willoughby Gallery, 12 North Water Street, Edgartown. Open year-round except for an occasional hiatus in winter. For additional information, visit willoughbyfineartgallery.com or call 508-627-3369. 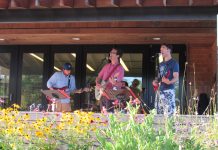 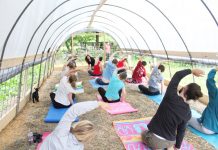 Yoga on a farm 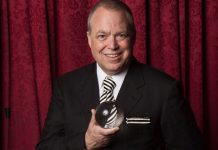