Thirty-seven of the 65 living members of the graduating class of 1965 attended their 50th reunion on Martha’s Vineyard the weekend of September 26th and 27th. The reunion opened with a picnic at the Bend-in-the-Road Beach in Edgartown, in the shelter of a dune on the gloriously sunny but windy day. Other classmates gathered at Farm Neck for a round of golf. Later that evening, the main celebration took place at Lola’s restaurant, which was decorated with Vineyard school colors (purple and white) and class memorabilia. The sound of 60s music blended with animated conversation and laughter while an abundant assortment of hors d’oeuvres was served. The president of the class, Doug Seward, addressed the gathering, thanking organizers Margaret Mayhew Pénicaud, Linda Veira Metell, and Margaret Leonard Burke for their work. Classmates who served in the armed forces were asked to stand, and were given a grateful round of applause. Throughout the evening, a flow of camaraderie abounded while memories and anecdotes were shared. A truly enjoyable evening was had by all.

Three “part-time members” also shared the joy of reconnecting with former classmates: Vineyarder Brian Flanders, Penny Winslow from Silver Spring, Md., and Gary Frank from White Cloud, Mich. Many of the classmates were accompanied by their spouse or a guest.

While updating the contact list, longtime missing Walter Kszystyniak was located in Nottingham, England. Still missing from the list is Eddie Neimec, and any information leading to his whereabouts would be greatly appreciated.

The reunion was topped off and closed with a total eclipse of a supermoon, a finishing touch to a wonderful weekend. 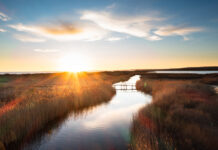