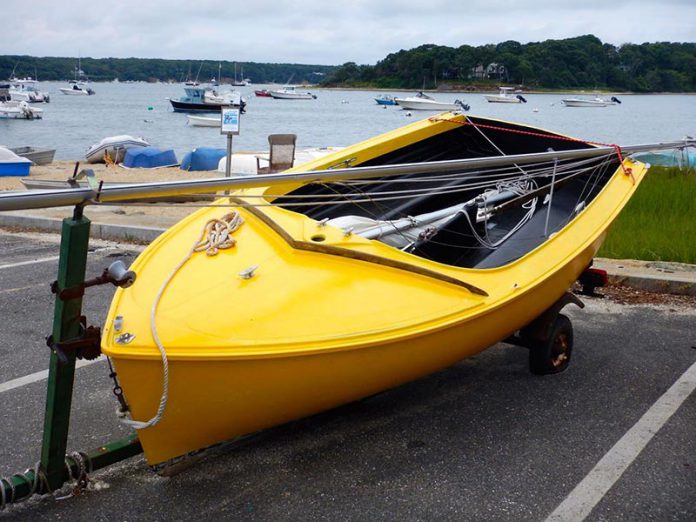 The Lagoon Pond launch ramp is the most convenient and boater-friendly ramp on Martha’s Vineyard, when its 26 parking places are not jammed with junked and abandoned trailers and boats — and when no one is sinking at the dock.

It was a Sunday, a day when I generally try to avoid boating, because the likelihood of mayhem on the water increases due to the weekend proliferation of sailboats, powerboats, Jet Skis, paddleboards, rowboats, ferries, fishing boats, and anything else that will float and move.

Tom Robinson and I departed the ramp about 7 am. It was still quiet, and we launched with no delay. Fluke and sea bass were the targets. With excellent forethought, I left my light spinning rod in my truck, thinking I would not need it.

This logic demands the question that I should have asked before we left the dock: What if I do need it? After all, one more rod in the boat more or less would not have mattered.

We managed to pick up a keeper fluke, along with some sea bass here and there, in about 80 feet of water off Cape Higgon, when we spotted some terns over what looked like a large pod of bait. With one spinning rod in the boat that belonged to Tom, a lefty, we motored over to see what was under the bait. When we got closer we realised that the disturbance on the surface of the water we thought was bait was in fact a school of striped bass, most of which we estimated to be about 24 inches in length, surfacing to feed on krill.

There was not just one school but multiple schools. Tom cast a lure, but the bass ignored it. We trolled a swimming plug through various schools, but the bass, so focused on krill, ignored it. Had I brought my light spinning rod and lures, I might have been able to entice a strike, but I had not.

The moral of this story is, Bring the extra fishing rod. Why not? Oh yeah, I have another moral — don’t forget to put your bilge plug in your boat.

For those of you unfamiliar with what a bilge plug does, it screws into a hole in your boat (intuitively, even nonboaters should understand that a hole in an object meant to float is not desirable) that when open, allows the water to drain from the interior of your boat when the boat is on dry land. When the boat is in the water and the bilge plug is not screwed in, the water enters your bilge and sinks your boat (Even nonboaters will understand that this is not a desirable outcome).

Tom and I returned to the launch ramp early, expecting most people would still be out boating, but arrived to a full-blown circus. The parking lot was congested with vehicles; a large cabin cruiser was tied to the dock. There was another boater pulling in right behind us, and a guy trailering a boat was pulling into the lot; a guy with a small Whaler was trying to get into position to launch his boat so he could get to his sailboat and make it through the drawbridge when the drawbridge opened, or so he was telling anyone who would listen, in an effort to speed things up.

Two guys on the cabin cruiser were speaking Portuguese. I don’t speak Portuguese, but I know frantic when I hear it.

“What’s going on?” I asked the man on the dock. “Are you guys coming in or going out?” It was really a subtle way of asking him to get out of our way.

The guy motioned to his friend, who I noticed was emerging from the cabin with a bucket of water, and said, “He forgot to put the plug in.”

“Yes, sinking,” the man said, in a good-natured manner given the severity of the situation.

Another member of their group then began backing down a boat trailer that looked as rough as the boat they were rushing to retrieve. The guys got the boat on the trailer, but when they went to haul it up the ramp, the trailer sounded like it was about to split in two.

There was so much water weight in the boat that they dared not pull the boat any further up the ramp — water gushed out of the bilge plug hole. Well, that presented a dilemma. I tried to ease the obvious consternation and embarrassment by pointing out that the boat owner was not the first one to forget to put the plug in, and at least he realized it before he was away from the dock.

Tom managed to back his trailer down next to the still-dewatering boat. It was a relief to get out of there as quickly as we could.

On busy days, it is important to be courteous. That means preparing your boat before you are on the ramp, and not stopping to wash it down when other people are waiting. It is also helpful to have passengers who arrive in separate cars double-park so there are spaces available for trailers.

Putting a boat on a trailer at the Lagoon launch ramp is clearly a breeze compared with what goes on at Deep Creek on Alaska’s Cook Inlet, where the art of hauling a boat is one part engine horsepower, one part seamanship, one part diesel tractor, and three parts prayer — believe me, this is not a place to haul a Hinckley picnic boat.

I regularly receive stories and videos from Outdoorhub, a news service that focuses on hunting, fishing, and many of the strange things that one generally would not find in the mainstream media. Last week, the news service provided a clip with the title: “Deep Creek Alaska boat launch carnage.” That sort of says it all.

Basically, the locals hook up their trailers to a waiting tractor. The tractor driver backs the trailer down a gravel beach and into the surf. The boater then races in amid the waves and up onto the trailer — only it doesn’t quite work out that smoothly. The locals seem to take it all in stride, as we do most days.

Last week, I wrote about the importance of a VHF radio and making sure that everyone on board knows how to call the Coast Guard on channel 16 (July 28, “On the water, channel 16 is your radio lifeline”). This extends to charter captains instructing clients on basic radio communication.

According to the police report, the passengers spoke only Portuguese. One of the clients managed to summon help on a cell phone by calling 911. They are fortunate they were able to get reception. Coast Guard crews from Station Brant Point and Station Chatham responded.

One reader who commented on that story suggested I also explain the difference between “mayday,” “pan-pan,” and “sécurité.” I spoke with Coast Guard Public Affairs Specialist Petty Officer Cynthia Oldham with the First District in Boston. Coast Guard watchstanders at all stations monitor VHF channel 16 around the clock.

She explained that “mayday” is reserved for a significant emergency, one that is life-threatening.

“‘Pan-pan’ is also an alert, but it is of less urgency,” she said. For example, if there is a disabled boat, a radio call preceded by “pan-pan” is a way of cutting through the radio chatter and telling mariners to be alert, or it is a way for a boater to announce a situation that is not a full-blown emergency.

“Sécurité” alerts boaters that there is a security or safety issue, for example, a log in the water, or a safety zone around a vessel under tow — a signal to take precautions.

With respect to “mayday,” Petty Officer Oldham said the most important piece of information a boater can initially relay is his or her location. “Even if you can’t say another word, it can help take the search out of search and rescue, because they know where to go,” she said.