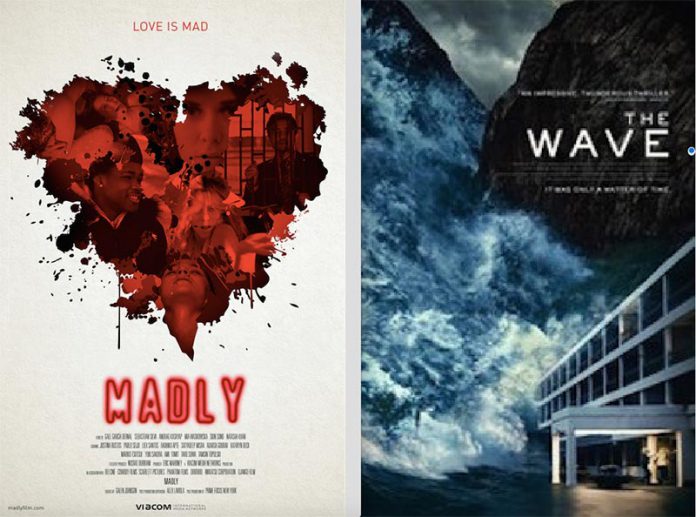 The Martha’s Vineyard Film Society will celebrate movies from around the world at its 11th annual International Film Festival next week. Forty-plus films from more than 17 nations will screen Tuesday, Sept. 6, through Sunday, Sept. 11, at the Martha’s Vineyard Film Center and the Capawock Theatre, both in Vineyard Haven. Animator Bill Plympton has once again curated a program of animated shorts, and results from a juried international shorts competition will be played. This year, the Film Society will honor actor Sharon Stone with its Global Citizen Award for her charitable and philanthropic work around the globe.

Hang onto your seats for “The Wave,” Norway’s 2016 Oscar entry for Best Foreign Language Film, which plays Wednesday, Sept. 7. Directed by Roar Uthaug, “The Wave” is based on an actual event that took place in 1934. The geologist Kristian (Kristopher Joner) is finishing his job monitoring rock falls into fiords, but has premonitions of disaster. When rocks do tumble into a fiord and trigger a tsunami, a nearby town’s residents have 10 minutes to escape. Kristian’s wife Idun (Ane Dahl Torpe) and son Sondre (Jonas Hoff Oftebro) are trapped in the hotel where Idun works. How Kristian will rescue them and protect his daughter Julia (Edith Haagenrud-Sande) keeps the tension high in a catastrophe film that seems all too relevant in the era of global warming–induced weather disasters.

The festival gets underway officially on Thursday, Sept. 8, with a party at the Tisbury Marketplace featuring Asian-style food and drink as well as live music. The Japanese film “Our Little Sister” follows at the Film Center. Festival screenings on Friday include “The President” (Georgia) at the Film Center. “Aferim!” a historical movie from Romania directed by Radu Jude, plays at the Capawock Theatre. Filmed in crisp black and white, “Aferim!” tells the neo-western tale of an early 19th century constable (Teodor Corbin). He sets off with his son (Mihai Comanoiu) in pursuit of a Gypsy slave who had sex with the local boyar’s wife. Father and son meander on horseback through the Romanian countryside as Costandin, the constable, lectures his son on life.

It’s helpful to know that Romania was part of the Ottoman Empire at the time, but dominated by Russia, and gypsies were treated and abused as slaves. Costandin makes often-brutal use of his authority, and it’s clear that women were mistreated almost as much as Gypsies. Once Costandin and his son capture the gypsy Carfin (Cuzin Toma), who is manacled and hung over the constable’s horse, they head back to the boyar. Things do not go well for Carfin, despite the boyar’s wife’s confession that she was complicit in the seduction. Also at the Capawock, “The Weekend Sailor” (Mexico/Canada) and “Neon Bull” (Brazil) follow “Aferim!”

The Film Society will present its Global Citizen Award to Ms. Stone on Friday, before a screening of the award-winning French film “Fatima” at the Film Center. The Thai film “Cemetery of Splendor” follows.

The Animation Shorts Showcase launches Saturday’s screenings at the Film Center, followed by “The Innocents” (Poland) and “Icaros: A Vision” (Peru). The Capawock plays “Right Then, Wrong Now” (Korea), along with the International Short Films Juried Competition and “People Places Things” (U.S.).

On Sunday, the Capawock features an Icelandic drama, “Rams,” directed by Grimur Hakonarson. This intriguing film relates the story of sheepherding brothers who live next door but haven’t spoken to each other in years. Matters change when an outbreak of disease means they must destroy their herds. Although primarily a drama, “Rams” has elements of humor as the two brothers gradually decide to end their feud. Also scheduled at the Capawock are “People Places Things” (U.S.) and “Court” from India. “The Tenth Man” (Argentina) and “The Wonders” (Italy) screen at the Film Center on Sunday. “Mia Madre” (Italy) and the winning short film at the Capawock will end this year’s festival. A closing-night party follows at La Soffitta in Vineyard Haven.

Film Society president Richard Paradise said about this year’s event, “I love film festivals because the films you get to watch are not mainstream or formulaic. They are meant to challenge, inspire, and be adventurous for viewers.” In addition to a full roster of films, filmmakers and guests from the media, politics, and art world will lead pre- or postscreening discussions.

Swimming and running for a cause

Flag with profanity taken down after complaints