In Vineyard Haven, Jason Leone is the only licensed dealer, doing business as Island Adventure Rentals on Beach Road. The business is authorized for 90 moped licenses. He did not attend the meeting.

Nicole Brisson, a member of the Mopeds Are Dangerous Action Committee, sent a letter of complaint to the selectmen, which prompted Tuesday night’s discussion. Mr. Gomez noted that the focus of her letter was licensing.

Ms. Brisson said that was because the selectmen are basically a licensing board. In looking at records, she said, there were discrepancies in the number of mopeds allowed and the number of mopeds licensed, and the allowance of license transfers, in complete contradiction of the town’s bylaw as amended in 2003.

“We’re not pointing fingers at the selectmen; we’re not trying to blame anybody or fault anybody for what happened,” Ms. Brisson said. “Our purpose is to show what’s happened and what is currently going on, in light of the fact this is such a severe public safety issue, and it has been for 40 years.”

Barbara Lampson, executive assistant to the town administrator and selectmen, provided background on the town’s existing moped bylaw and regulations. The original bylaw passed in 1986 was updated in 2003 with the addition of a number of safety and business-practice regulations.

“What we’ve been focusing on particularly this year are that all safety elements, whether from 1986 or 2003, are strictly enforced,” Ms. Lampson said.

Those include the specific dimensions of a training track, which does exist on the property, and a ban on training on the street, she added. Other regulations include the requirement that moped riders must wear shoes that cover the whole foot, the business must keep records of renters, and the town must verify the vehicles’ registrations.

“There has been some discussion of additional elements being added to the licensing process that would increase and give some other handholds for safer practices, as suggested and discussed with other towns,” she said. “Some exist in our regulations, and any that don’t are under consideration by the selectmen to add to the moped bylaw, possibly this year.”

Ms. Loberg said she had read through all the files. “Having this call for attention is important,” she said. “We definitely want to adhere to our own licensing requirements. This gives us an opportunity to really scrutinize them, which we are doing, and to absolutely enforce them to the letter.”

Ms. Brisson said Tisbury Police Lieutenant Eerik Meisner attended a public policing process with her and a group of people to discuss moped safety issues and improvement, and suggestions for going forward in amending bylaws. Lieut. Meisner also worked with Mr. Leone on a risk notice for operators, she said.

Ms. Loberg said the selectmen have looked at some of the other suggestions for safety regulations, and would be in favor of adding two or three, on advice of town counsel. Town administrator Jay Grande said he recently sent materials to town counsel.

About 20 people turned out for the moped discussion. Katharine Kavanagh, a Tisbury resident, expressed her concerns as a commercial bus driver who drives school buses and Vineyard Transit Authority buses on the up-Island route.

She said last fall, on two occasions, she came upon a pair of mopeds with two people on each that were driving down the middle of the road, heading toward the cliffs in Aquinnah. She called the Chilmark Police, who later told her the operators said they were told to ride in the middle of the road because it would be safer for them.

“There is no system of accountability on the part of the [moped business] owners to take responsibility for information their tourists have been given,” Ms. Kavanagh said, adding that she has witnessed several accidents.

Jeffrey Canha, a charter fisherman and artist, recalled his experience working in a moped rental business licensed for 25 vehicles in the Union Street parking lot, from 1978 to 1984.

“The truth is, the regulations in the bylaw aren’t adequate and up to date with what’s presently happening,” Mr. Canha said.

“When people walked off the boat, I’d ask if they’d ever rented a helicopter,” he added. “They began to understand that if they didn’t pay attention, they would go for what ended up feeling like a helicopter ride. We’d have them drive around the lot and watch them like a hawk.”

Ms. Loberg noted that the Vineyard is a very small and close-knit community, and that many people have been traumatized by accident scenes.

“We are taking your concerns very seriously, because we share them,” she said. “We will do everything in our power to hold [moped business owners] accountable and to impose safety regulations on them. We’ve been re-energized by understanding better the history of the licensing, and are taking steps to find out what the limits of our authority are.”

Ms. Loberg and Mr. Gomez voted to approve a motion to review the current regulations and update them prior to the renewal of the current moped rental business license, if possible, and if not, to add the intended updates as conditions.

They also voted to approve Ms. Brisson’s request to put a nonbinding ballot question on the town ballot asking voters if they are in favor of eliminating rental mopeds on Martha’s Vineyard.

Ms. Brisson also asked the selectmen if they would consider a warrant article similar to one the Oak Bluffs selectmen are considering that would render the moped rental business licenses null and void due to violations of bylaws and lack of enforcement. Otherwise, she said she would need to get a petition signed by Friday in order to get an article put on the Special Town Meeting warrant.

Ms. Loberg said the selectmen are unsure about the legalities of such an article and are waiting for advice from town counsel. She suggested Ms. Brisson pursue the petition signatures. “If a petition comes in to us, we’re obligated to put it on the warrant,” she said.

The selectmen concluded the moped discussion and took up their remaining business at 5:30.

In other business, the selectmen voted to approve a food and refreshment policy and an electronic devices for town hall employees; a Waterways/Harbor Planning Committee mission statement and charge; the creation of an energy master plan by the town’s energy committee; and a 5K run by the MV Hurricanes Youth Running Club on April 29.

They also voted to move forward with a plan to propose a new health plan with higher deductibles to town employees and agreed to put a public comment period back on their meeting agendas.

The selectmen voted to go into executive session at 6:29 pm to discuss strategy with regard to collective bargaining with the general union and negotiations with the Martha’s Vineyard Land Bank. 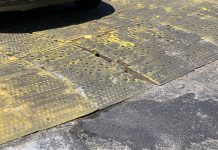 Gateway to a secret garden