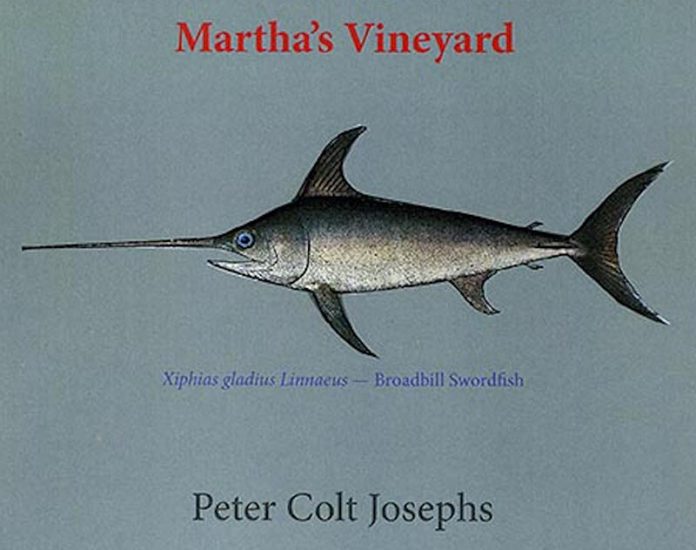 Peter Colt Josephs is a scholar, the son of a scholar, and a fervent Vineyarder. He lives happily and lovingly in thrall to Island history of the mid-20th century. Not necessarily to its rigorously documented, or even imaginatively reconstructed, history, but rather to its colloquial history, and to the population of fables, stories, and characters that made it, and now live delightfully in Peter’s memory. In his newest effort, “Tales of the Massachusetts South Seas: Stories from the Cape Cod Archipelago, Martha’s Vineyard,” he explains, “It was on this earthly paradise, from 1938-1978, a period of forty years, that our story takes place.”

I am assuming the privilege of using Peter’s given name, because for more than 20 years we were neighbors in Chilmark, and because in 1974, I admired his research, detailed in “The Remarkable Brick Barns of Martha’s Vineyard,” which I reviewed when it was published. Unhappily, I missed his booklet, “Megalith to Monolith: Pre-Columbian Fertility Monuments on Martha’s Vineyard,” in 2011.

“Tales” is a curious, meandering collection, featuring recognizable personalities, some long dead, some familiar to 21st century wash-ashores, that pretends to an orderly progress in five parts, touching on Menemsha, Chilmark and Gay Head, West Tisbury — Edgartown, Vineyard Haven, and Oak Bluffs share a single part of Peter’s survey — and Woods Hole. But really it’s more amiable than orderly, full of the sort of tales one might enjoy hearing before bedtime from a grandfather whose interests have lately confined themselves to what he remembers rather than what he foresees. Peter calls it a “classic collection of interesting, enduring stories for the Vineyard that has theatrical possibilities as well, perhaps musical theory.” His hint is not without some promise.

Consider Peter’s story of Henry “Hank” Hatt, who was the first to see a whale run up on an Island beach. Henry found the beach nearby overlain with a “thick, grayish, waxy substance.” He didn’t know what it was, but he believed it came from the whale carcass. At Sam Seaweed’s Seagoing Grocery in Menemsha, Henry gave a full account of his beach walk and his find. From there word spread, and Creekers and Chilmarkers generally concluded, “Why that sounds like ambergris. It’s worth $2,000 an ounce,” old Captain Ernest Mayhew announced.

And the race was on. Chilmarkers — mothers, fathers, children — rushed to the beach to gather as much of the stuff as they could. They worked tirelessly, and soon all of the “grayish substance” was off the beach and in iceboxes in Chilmark houses. A day or two later, the Vineyard Gazette delivered the disappointing news that the stuff “was not worth a cent, for it was just plain old ordinary whale excretal.”

Peter describes his work proudly: “This is a cutting-edge, meticulously researched work of descriptive innovative, narrative, transparent fiction that includes an extensive glossary with many nautical terms, along with an index of Algonquian linguistic group American Indian place names.” He also calls his work a “novella,” and promises that “Several forty- to fifty-year-old Island mysteries are at last resolved.”

One has the impression that Peter has pleased himself enormously in the preparation of this collection, that he has stuck to the bones of each legend where he must, and embroidered them where he saw fit. He makes up names for some of his characters, uses the actual names and nicknames of others. The reader will find himself confused and at times uneasy about what is immutable history, what is fabulous embroidery, and what is eulogy for people and times gone by. He is at times a character in his story and styles himself “Peter Crichton,” a journalist who partied hard.

“Peter Crichton, at 6’6” and a slim man, lived in a stone house off the Middle Road in Chilmark with outbuildings such as a driftwood shack. He had added to an 18th century corn crib next to a stone line farm well at grade and a one-holer outhouse. He had had some notorious parties in that shack: such as the night that they had an outhouse moving party, when at the stroke of twelve o’clock midnight a row of car headlines were turned on and eight strong man had lifted the privy up to move it to a more private location on another part of the property.” Later, off duty, the cops shed their uniforms and joined the party in their skivvies, with the booze they had taken from the kids.

Among the legendary people and places: “Donald Boots, Marine Mechanic, Vessel Recovery”; “Clarence ‘Scup’ Tilton”; Henry Beetle Hough, late revered editor and publisher of the Vineyard Gazette, occupies a place in this fanciful “novella,” as does Joseph Chase Allen, the With the Fishermen columnist at the Gazette. So does Dr. Bob, Robert W. Nevin of Edgartown; John Rogers, Steamship Authority quartermaster; Stan Hart, writer, editor, and tennis central. And places too: Alley’s General Store, Barn House, Dutcher Dock, the Menemsha Bar in New York City. And the hurricanes of ’38, ’44, and ’54. Some of the fun in all this is guessing who are the real characters Peter has renamed for the purpose of his tall-tale telling.

Historians often try to tell their stories at a distance from their subjects. Peter lives in and with these stories that he tells. He is besotted with the Vineyard and its history, and relishes the retelling.