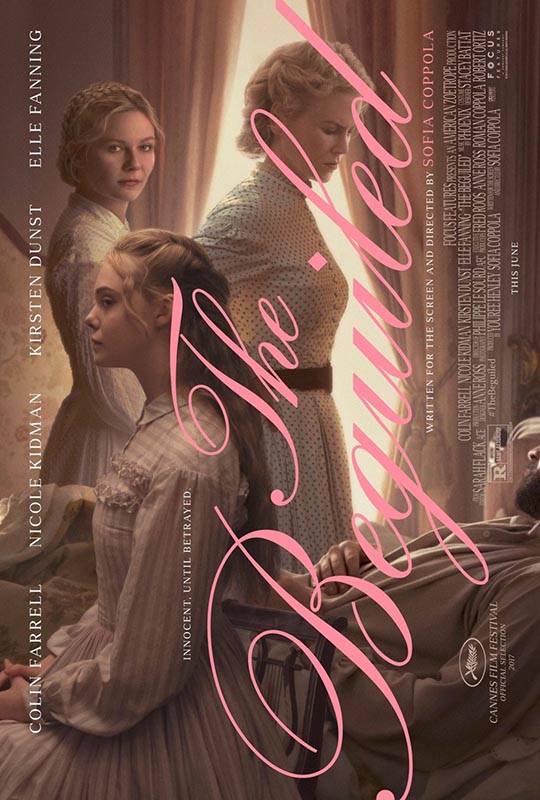 Like many of Ms. Coppola’s films — she won Best Director at Cannes for this one — it is set in a world of women. Time and place are the approaching end of the Civil War in Virginia, where five young ladies are tended by Miss Martha (Kidman) at Miss Farnsworth’s Seminary for Young Ladies. It is a rarefied, atmospheric place. Majestic Spanish moss–covered trees, swirls of mist, and birdsong surround the Corinthian-columned mansion. The camera enters in a slow zoom. One of the students, Miss Amy (Oona Laurence), wanders an allée of trees in search of mushrooms, and comes across a wounded Union mercenary, Cpl. John McBurney (Farrell). She helps him back to the seminary, where Miss Martha tends to his injured leg. With artillery fire only a distant rumble in this Confederate enclave, the fox has entered the henhouse. The genteel seminary has food and spirits to spare, and there are no slaves in sight.

Ms. Coppola’s “The Beguiled” is a remake of the 1971 Don Siegel film with the same name, starring Clint Eastwood, and both are based on Thomas P. Cullinan’s 1966 novel “A Painted Devil.” The Coppola version is far more refined, otherworldly, and feminist than Siegel’s. While setting and costumes suggest a conventional historical tale, Ms. Coppola delves below the surface to reveal the passions and power of these women. Most everyone at the seminary is smitten by the handsome soldier with the Irish brogue. Alicia (Elle Fanning) is the school’s teenage brat, who delivers kisses to a sleeping McBurney. Edwina (Kirsten Dunst), the seminar’s other instructor, falls for the handsome soldier once he woos her. Miss Martha bats her eyes, shares aperitifs with him and discusses the futility of the war. Miss Edwina considers running away with him, and Miss Alicia has more carnal intentions.

Cpl. McBurney seems eager to aid these apparently helpless women, weeding their garden and performing other tasks once he’s on the mend. At this point he hopes to take up residence in the seminary. The turning point comes when the corporal gets caught taking advantage of one of the young ladies. A tumble down the stairs reinjures his leg, with grim results. Miss Martha decides to remedy Cpl. McBurney’s now broken leg. “I’d rather be dead than a man without a leg,” he rages. The seminarians again demonstrate their power and spunk to bring the story to an end, and raise the question of just who is the beguiled.

For information and tickets to “The Beguiled” and other Film Center movies, see mvfilmsociety.com.