It’s hard to say what was more beautiful Sunday evening — the weather or the overwhelming generosity at the 39th annual Possible Dreams Auction. A crowd of over 500 people gathered on the lawns under a cloudless sky at the Winnetu Oceanside Resort in Katama for a fundraising event on behalf of Martha’s Vineyard Community Services — and more than $400,000 was raised by the end of the night.

Sherry Truhlar hosted the event for the first time, in the shadow of such legendary auctioneers as Art Buchwald and Jimmy Tingle, and her fast-paced delivery kept the energy alive and the bidding high. The event began at 3:30 pm, when guests could make bids on Super Silent and Silent Dreams, and purchase raffle tickets. Local music from the PickPocket Bluegrass Band accompanied the early hours of the event.

Guests filed into their seats at 5 pm for the Live Auction, which featured 26 Dreams donated by more than 50 donors. Dreams are an array of outings that celebrate unbuyable on- and off-Island experiences. Before the Live Dreams began, auction committee chair Liza Cowman May and MVCS executive director Juliette Fay presented their opening remarks.

“This auction is about celebrating the Island and the people who make it what it is,” Ms. May said. “I’m so happy I call this place home.”

Some of this year’s big-ticket Dreams included the “Take a Bite, or Two, of the Big Apple,” which gave away four VIP tickets to a taping of NBC’s “Late Night with Seth Meyers.” The outing sold for $15,100. “Rocking at the Ritz” was another high-bid event, which auctioned off a private party at the Ritz for 50 people, featuring music from Johnny Hoy and the Bluefish. Islander Elaine Miller won the bidding war at a whopping $10,000.

“We wanted to celebrate my husband’s 80th birthday in conjunction with my son-in-law’s 60th,” Ms. Miller said. “We decided to cap it at $7,500, but what’s another $2,500 if it’s going to one of the most significant community service programs on the Island?”

The greatest bidding battle didn’t occur until the very end. “Your Room with a View for the OB Fireworks” auctioned off a private dining experience at Offshore Ale Co. overlooking Ocean Park for Oak Bluff’s annual fireworks on Friday, August 18. Joanne and Marty Hamlish brought it home for $18,000.

“We bid on it as a silent auction item last year,” Ms. Hamlish said. “We couldn’t wait to do it again. It was one of the most fantastic evenings we’ve had on the Vineyard.”

Special attention was given to the MCVS Recovery Coaching Program, which is a new model of intervention used to help people struggling with alcoholism and addiction. According to program supervisor Eric Adams, the program began in April 2016, and since December, it has brought over 60 Islanders into detox centers on the mainland. “The program is saving lives,” he said.

This segued into the “Everybody Wins” portion of the auction, where guests had the chance to raise their paddles for recovery counseling, starting at $1,000, and going down in increments to $100. Ms. Truhlar asked if anyone wanted to exceed the $1,000 cap, to which there was an overwhelming response that brought in over $80,000. An anonymous donor alone pledged $25,000.

Possible Dreams is a true celebration of Island generosity, and community gratitude. Ms. Truhlar joked, “It’s only money; they print more every day.” 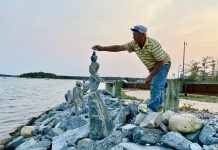 An insult to American soldiers