Rose Guerin from Chilmark moves behind the bar at the Ritz with ease and efficiency. She has short, blonde, curly hair and wears cherry-red lipstick; she takes no nonsense from the 5 o’clock crowd on a Friday night. Regulars call her Rosie, and she’s been tending bar on-Island for seven years.

Every night is a weekend for vacationers on Martha’s Vineyard, so bartenders are on a full-time grind. They’re usually working six nights a week with shifts that don’t end until well after 1 am. There are few dull moments, and lots of rewarding tips — and according to the tenders The Times caught up with, a good night brings in around $500. Bartenders actually seem to like their jobs, and there’s something to be said about those who keep the spirits both flowing and in check.

Up the road not too far from the Ritz is the Lampost, and most nights there’s a good chance Craig Ranucci is behind the bar mixing drinks. “Hold on,” he said to a visitor. He returned quickly, surprisingly unfazed after cleaning up after some overzealous customers. Dealing with drunk people is part of the job description, and he continued to serve the steadily occupied bar, pouring mainly draft beers for the early evening crowd. He wears a baseball cap and a T-shirt, and he’s from Leominster.

Sarah Gail Hutcherson is from St. Petersburg, Fla., and she occupies the back bar at the Atlantic in Edgartown. She owns that space and everyone seems to know it. “I’ve built something here,” Sarah Gail said of the small, fully stocked bar she’s tended for the past three summers.  The main bar is manned by many, and takes up a large section of the front of the restaurant. The back bar is a personal experience, with isolated service hosted by Sarah Gail. She has bright blue eyes and energy that makes you feel as if you’ve met her before. “This is the fat-free bar,” she joked to a couple as they sat down.

The always-crowded Port Hunter somehow services its constant customer flow with ease. Bartenders like Andy Vandermeulen from Warwick, N.Y., make sure of that. “Everyone has each other’s backs,” he said. “It makes the crazy-busy nights less crazy.” Andy is tall and has short brown hair. He dresses in the classic head-to-toe black all Port Hunter employees wear. He’s got a clear feel for his customers and a bar full of regulars.

Sarah Gail said the most popular drink at the Atlantic this summer is a Pink Panther — which is Deep Eddy vodka mixed with soda. Rose at the Ritz agreed, “It’s been really big with the kids.” Andy at the Port Hunter said the drink of the season is either a Moscow Mule or the Cucumber Cleanse. A “Mule” is Ketel One vodka, lime, ginger, simple syrup, and soda. Cucumber Cleanse is Square One vodka, lemon, simple syrup, cucumber, and mint. Craig at the Lampost said it’s been a simple Tito’s and soda, or a Long Island iced tea. “But a lot of people have been calling it a ‘Strong Island’ iced tea. That’s when I know to add more Coke,” he said.

Crowd maintenance is a huge part of the gig. “You have to have people-confidence,” Sarah Gail said.  A range of customers frequent the Atlantic, “We get anywhere from the filthy rich to the salty fishermen to the freshly 21-year-olds,” she said. Andy at the Port Hunter described a similar scene, “The crowd is up-scale but down to earth.” Both Edgartown bartenders agreed that their crowd stays in-check, and they don’t have to kick people out nearly as often as they might at another bar.

“That’s actually one of my favorite things to do,” Craig at the Lampost laughed. “I had to tell four guys to leave last night.” The Lampost is busiest on Saturdays, and Craig calls it a cross between a dive bar and a nightclub. The second floor has a dance floor that attracts bachelorette parties, and an age range anywhere from 21 to 50-plus.

Rose said that  the crowd at the Ritz brings in a lot of regulars, and local music is a huge draw. Earlier shows appeal to an older crowd, and the later shows attract younger groups. “We always get locals, and when visitors trickle in I think they get really excited, because they found the local spot. We’re a dive bar, we serve beer, we’re not trying to be fancy, but we’re just sort of killing it.” Thursday nights are busiest at the Ritz. Rose is a musician herself, and is known to jump in and sing along with whichever band is performing.

All that time behind the bar allows these tenders to get creative. Craig discovered a shot that tastes like a wine punch. “It never disappoints,” he said. It’s made with vodka, grenadine, triple sec, and amaretto. Sarah Gail takes pride in her lemon juice soda water mixed with Huckleberry vodka. “It’s so refreshing and delicious,” she said. Andy tossed together a drink he calls Girls Night Out. It’s a half-ounce of Deep Eddy lemon vodka,  a half-ounce of Deep Eddy grapefruit, a splash of Amaretto, and pineapple juice, topped with soda, and shaken.

Maybe T-Pain was on to something in 2007 when he rapped about how you could always find him with the bartender. They’re the unsung heroes of your night out, and ironically enough, probably the most interesting people at the bar. 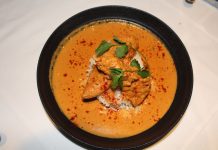 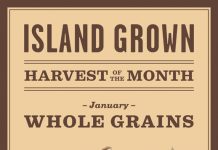 Harvest of the Month: Whole Grains