Not a bad gig to visit by far the most beautiful scenery to be found on Martha’s Vineyard on a warm fall afternoon, and be able to call it work.  The main purpose of the visit to Chilmark was to preview a home that recently was listed for sale by Tea Lane Associates.  The property was developed by the current owner, a financier who sits on many regional and national boards.  The home was nothing short of breathtaking with its marvelous ocean and meadow views from each room is complimented by exquisite floor to ceiling design details.  The listing information described it thusly: “Like a great artistic masterpiece, it gets better over time.”

But what is it that makes Squibnocket Ridge (of new access road fame) the finest waterfront community on the east coast? For me, the 228 acres managed by the Vineyard Open Land Foundation designated as “Forever Wild” is the biggest draw to the area.  Unspoiled and dramatic views of sand, dunes, grassland, and ocean as far as the eye can see.  The area containing its sixteen homes is managed by a homeowners association and contains 145 acres under a permanent conservation restriction.  The entire 535 acres including the sixteen privately held lots is bordered by the Atlantic Ocean and Squibnocket Pond and surrounded by several miles of sandy beaches also maintained by the Howmeowners’ Association. The Chilmark Town Beach and parking lot are leased from Squibnocket Farm Association on a 99-year lease.

How did this come to be?

Around 1870, 2 striped bass fishing clubs were organized and controlled 900 acres of Squibnocket Ridge around Squibnocket Pond.  One was the Providence Club whose 300+ acres came to be owned by the Onassis family in 1978.  Formed a few years earlier was the Squibnocket Club whose members were New York elite and included many politicians.  In 1926 the Hornblower family acquired the remaining 550 acres.

In 1926 the entire 300 acres were acquired by the Hornblower family and managed by The Cape Cod Company..  The 16 home-sites and surrounding land are “forever wild” and set in one of the wildest, most natural open landscapes on the island.  The conservation land was acquired by the Vineyard Open Land Foundation in 1970.  Their mission is primarily “…to assist in, and promote the preservation of the natural beauty and rural character of Martha’s Vineyard” and “…promoting sound conservation practices on the Vineyard so as to maintain to the greatest extent feasible and practicable, the quality of life on the Vineyard”

In 1980, the Hornblower family and Cape Cod Company began selling off the 16 building lots after recording significant building restrictions and covenants.  In addition to normal restrictions of size, density, heights and lighting, any construction must be contained within pre-drawn building envelopes.  The covenants are very clear that care must be given to any and all rare plant species and Rare Plant zones outside of private ownership have specific care requirements and maintained by the Squibnocket Homeowners Association.

I have had mixed feelings about the large tracts of land acquired around the country by the so called “robber barons” in the late 19th and early 20th centuries.  As time as passed, many of those large tracts became impossible for one family to control and maintain.  Many of these families had the foresight to protect these lands with conservation restrictions and/or placing them in the hands of government agencies. Without these early acquisitions, many of the most beautiful vistas in the country as well as enjoyment through hiking, boating and meditation would not be available to the public.  I thank those early owners for their ability to acquire the land as well as their consideration to make them “forever wild”

Fred Roven will write occasional “Real Estate Confidential” stories for The Times, which will feature the latest in interesting listings and sales, and inside scoops on properties. Find it on Fridays in The Minute newsletter. You can reach Fred at mvbuyeragents.com and see more on the listing here. 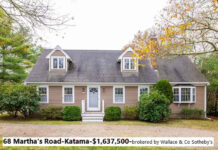 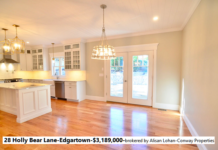 Real Estate Confidential: The gift of a new home 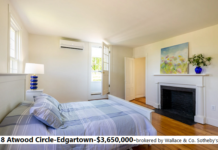