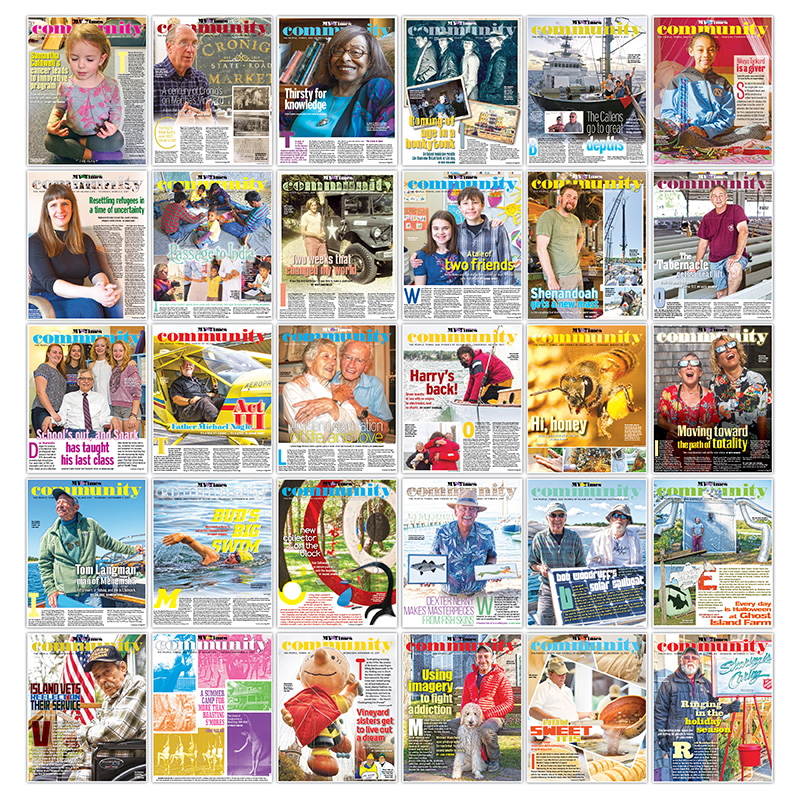 The new year is a time of reflection. In our case we took the time to think back on the many people we’ve featured in our Community section over the past year, and what a diverse and vibrant group it is.

Adventurers like Harry Ricciardi, who sailed off for the Caribbean with no engine or electronic navigation, or the Kruszewski sisters, who set off for Manhattan to pilot a Macy’s Thanksgiving Day balloon.

Artists like Michael Blanchard, whose inspirational photography and writing help people struggling with addiction, and KT Hinni, who started the School for Creative Arts in West Chop.

It just goes to show, if you strike up a conversation with a stranger on the ferry, you never know what you’re going to get. Chances are, a real good story.

“In January 2015, my 9-year-old daughter, Samantha, was diagnosed with brain cancer,” said Anne Caldwell. “We needed something.”

Anne went on to create Yogamotion. “It’s not just yoga,” Ms. Caldwell said, “A lot of these classes are about getting heart rates up using creative movement, physical activity, games, and tools for teaching kids self-calming, self-regulation, and mindfulness.”

Island musician Mike Benjamin recalls coming to the Island with his band after high school and playing at the legendary honkytonk, the Seaview Hotel. “Johnny [Seaview],” Mike wrote, “a Stetson perched proudly on his head and clutching a Miller High Life, was always ready to dance with a girl half his age or pick a fight with a guy twice his size.”

A Vineyard father and son join a research ship to map the ocean floor.

It might not seem noteworthy that the director of Sail Martha’s Vineyard and a professional kiteboarder were going to sea, but neither of them had ever boarded a research ship before, and they were about to spend three weeks in a remote part of the Pacific Ocean.

Island fifth grader Nikeya Tankard raised nearly $2,000 for local charities in the past two years. She did it by selling bracelets for $1 apiece. That’s a lot of bracelets.

Makenzie Brookes travels the country with the State Department helping refugees make homes. “My favorite story, and this one makes me cry, was when I was in Indiana, and a Jewish synagogue had written a check to a Catholic agency to help resettle Muslims,” Makenzie said.

Local high school student Sophia McCarron spent three weeks with a crew filming a child labor documentary in India. Boys were rescued from factories, stone quarries, and other places that employ child labor and brought to live at Bal Ashram, where they were given an education, access to therapy, and the chance to play and have a childhood.

It was 1970, the first Earth Day — it was time to make a statement. Whit Griswold and his co-conspirators filled up an Army surplus 3/4-ton pickup truck with litter they had picked up on the Island and dumped it on the Edgartown courthouse lawn. Hijinks ensued.

Winnie Welles and Ryan Murray, both autistic, get ready to move on to high school. Theirs is a tale of two friends facing a new set of challenges.

A highlight of the True Colors Ball, an evening celebrating gay, lesbian, and transgender youth, was the Charter School’s own Max Dankert, who performed three different drag sets to music by Katy Perry and RuPaul, and “This Girl” by Kung. Max received standing ovation after standing ovation, and loud cheers as his dance routine culminated in an impressive jump and split.

When people on the waterfront speak of Myles Thurlow, it’s with such reverence that one might expect him to have a flowing white beard. Myles is in his early 30s, and when Capt. Bob Douglas commissioned him to build a new mast for the Shenandoah, Myles jumped to it. “We’re lucky Myles hangs his hat here,” said Capt. Douglas.

After 156 years, the benches at the Tabernacle needed some TLC. Rob Gatchell began restoring 253 benches in the fall of 2016. “Remember,” Rob explained, “these benches go back to the 1860s, and were exposed to the elements year-round. After the Tabernacle was built in 1879, the benches still sat on dirt.”

This was the year longtime English teacher Dan Sharkovitz retired from MVRHS, after 37 years. Shark, as he is affectionately known by nearly everyone, was, and is, hardwired to be a storyteller. Gregarious, generous, and cheerily self-deprecating, he instinctively shapes his narratives to honor other people, adding meaning and nuance to his anecdotes.

Father Michael Nagle is a pastor of Good Shepherd Roman Catholic Parish, which includes all three Catholic churches on the Island. Father Nagle, 71, became interested in flying in the mid-1960s when a friend took him skydiving. He’s made 300 jumps since then, and all those jumps led to his interest in flying.

Howie and Cynthia’s love story became a national treasure shared by news outlets around the world. Sixty-two years after meeting at college in California, they became reunited in 2012 and joined as a couple in 2013.

On Nov. 8, 2016, Harry Ricciardi set off for the Caribbean in a 26-foot sloop with no engine, no electronics, and no charts. Six months later Harry headed up Vineyard Sound, still single-handed, and with a boatload of good stories to tell.

Emerson Hazell wears many hats, among them the meshed hat of a beekeeper. “My mom was freaking out on the way back [from getting the bees],” said Emerson, “because she was scared the bees were going to get out. I was trying to play it cool, but as soon as the first bee escaped from the hive, I freaked out, because there were bees flying around our heads while we were on the highway …”

Two crazy librarians seek out the solar eclipse. Beth Kramer and Nelia Decker of the West Tisbury library pack up their goggles and head off for Nebraska and the path of totality.

Over the past year, Jonathan Burke spearheaded a campaign to shed light on mental illness on the Vineyard. Jonathan shared the stories of those battling bipolar disorders, depression, schizophrenia, and eating disorders — and stories of his own battles as well, in “Mental Illness on Martha’s Vineyard.”

After retiring, 66-year-old Bud Raymond set off from Naushon island, near Woods Hole, and swam to Cedar Tree Neck on the VIneyard. It took three hours and 15 minutes. Who needs a ferry to get across Vineyard Sound?

Driving down Lambert’s Cove Road in West Tisbury, you can’t help noticing a transformation taking place on one particular property. It’s Tom Galloway’s sculpture park. Mr. Galloway believes, “If a sculpture park is done well, it’s one of the most beautiful things that exists.”

Michelangelo had his ceilings. Dexter Nerny has his fish skins. Dexter takes fish skins and transforms them into earrings, necklaces, bracelets, belts, belt buckles, adornments for hats, decorations on a money clip, and pieces of nautical art.

Eighty-two-year-old Bob Woodruff has always been a conservationist, and that’s what drove him to develop a solar-powered sailboat. Phil Hale of the Martha’s Vineyard Shipyard said, “In terms of boats around here whose sole motor propulsion comes from electric motors, batteries [and solar panels], it’s his [Bob Woodruff’s] and only one or two others.”

For Rusty Gordon of Ghost Island Farm in West Tisbury, every day is Halloween. Even in mid-summer, spooky cobwebs adorn his Ghost Island Farm shop, And when October arrives, skeletons come out of the closet, a zombie child with vacant eyes wanders, an alligator crawls through the lettuce field, and a spindly tree root turns out to be a furry-legged spider, ready to pounce.

The School of Creative Arts, in West Chop, ran from 1949 to 1968. It was an extraordinarily ambitious camp in an enchanting mansion on the bluffs of West Chop, which touched everyone who taught there or attended. At the heart of this institution was a captivating figure named Katherine Hinni, known to all as KT.

Two Vineyard sisters get to live out a dream: flying a giant balloon in the Macy’s Thanksgiving Day Parade.

Michael Blanchard’s own struggle with addiction inspired him to reach out to young adults in crisis. Through his inspirational photography, and writing his story of addiction and recovery, Michael has been effectively helping Islanders of all ages seek help for substance use disorder.

Mike McCourt, general manager of Murdick’s Fudge on Martha’s Vineyard, will be helping Murdick’s celebrate its 40th anniversary on the Island this year. Murdick’s Run the Chop annual race has raised close to $100,000 for the Martha’s Vineyard Boys and Girls Club over the past 16 years.

Rick Reinhardsen is a third-generation Salvation Army bell ringer. Islanders know Rick, and after 50 years of volunteer work on the Vineyard, he knows many of the donors, and lights up when a child beams at him while dropping alms into the red kettle.

Steve Bernier took over the helm of Cronig’s Market 20 years ago, and continued the tradition of service and excellence started by the Cronig family 100 years ago.

Tom Langman has been a part of the fabric of Menemsha for 50 years. Mr. Langman’s mother, Anne Simon, was a noted environmentalist who suggested to Morris K. Udall, former chair of the House Interior Committee, that the Gay Head Cliffs be a national monument: “About three days later, a group from the Interior Department appeared.” The rest is history.