The Southeast Massachusetts Regional Transportation (SMART) group was formed by retired physician Bill Hallstein, ecosystem environmentalist Brian Von Herzen, and Nat Trumbull, associate professor in the department of geography at the University of Connecticut and director of UConn’s Maritime Studies Program. SMART believes the problem is regional, not local in nature, and is working from that regional premise, Mr. Hallstein said in a recent interview at the Times.

“Essentially, we have a funnel through which goods, services, and people from Boston and points west enter at the open end — on the highway system — leading to the Cape bridges, where the funnel narrows, and narrows further as traffic travels on local roads to Woods Hole,” Mr. Hallstein said.

“We ought to think of the entire southeast Massachusetts region as one island that includes New Bedford, the Cape, and the Islands,” he said.

Noting that both the Islands and Cape communities and truckers enthusiastically fingerpoint at each other about the traffic snarls and early-morning discomfort of tractor-trailers lumbering down local Cape roads, Mr. Hallstein said the real problem is that the transportation and delivery system has been affected by growth.

Population growth numbers on the Cape and this Island detail the growth. In 1950, 15 years after the bridges were built and 10 years before the SSA charter was written, the year-round population of Barnstable County was about 47,000 people. Now it is 215,000, not counting 6 million visitors a year. Dukes County, in which Martha’s Vineyard is located, was home to fewer than 5,700 souls in 1950. Year-round population is about 18,000 today, swelling to more than 100,000 in summer.

“But the bridges haven’t gotten bigger, and the roads haven’t widened. They are the same size,” Mr. Hallstein said, noting that the state Department of Transportation (DOT) is taking a close and worried look at the bridges’ condition and traffic impact with an ongoing study.

In fact, the DOT website reports, “the two functionally obsolete highway bridges are 80 years old and have required increased maintenance activities by the U.S. Army Corps of Engineers. … This will have a significant impact on emergency access and safety, community connectivity, and impacts to the economic activity of the Cape Cod communities.

“The [ongoing Cape Cod Canal Transportation] study will entail the development and analysis of a full range of transportation alternatives, including highway, interchange, and nonhighway improvements, as well as options and design elements that improve access for all modes. The alternatives considered will also include the evaluation of potential alignments for an additional or replacement crossing over the Cape Cod Canal,“ according to DOT.

The SMART initiative held its first public meeting last month, attended by 30 people. Mr. Hallstein, retired psychiatrist and longtime staffer at the Sea Education Association (SEA) in Woods Hole, says SMART’s work “is in the diagnostic stage. We are meeting and talking with all the stakeholders, including the SSA, the Cape and Islands communities, up to Boston and with members of the legislature.” SMART meets at the Woods Hole library every two weeks. The next meeting is on Thursday, Dec. 28, at 7 pm.

“It’s not rocket science. One wanders around the Cape and clearly sees it overwhelmed by traffic,” Mr. Hallstein said. “I’ve been on the fringes, listening to complaining for years. I want to do something that makes sense, not complain about it. There has to be more to do, a bigger canvas, with success you are able to see at the end. Sustainability and survival of the Islands are core parts of the vision.”

Mr. Hallstein says SMART is chasing a regional solution and avoiding local partisanship. For example, on a macro level, “the Port of New Bedford is working hard to be a major port. Diverting goods and supplies to New Bedford for delivery to Martha’s Vineyard would ease traffic on the bridges and roads,” he said.

At the micro level, “we learned, for example, that Martha’s Vineyard ferries its trash off-Island for recycling, then ferries it back as fertilizer. Does it makes sense to recycle on the Island?” he asked.

“We have learned also that prioritizing freight is a good idea. Food delivery is a priority, but can trash removal, delivery of building materials be handled differently? We’ve learned that slower is cheaper. The Woods Hole Oceanographic Institution barges its fuel delivery. Slower but cheaper,” Mr. Hallstein said.

SMART has also figured out that the Steamship Authority is a key player in the discussion. Chartered by the legislature in 1960, the SSA controls ferry services to both Islands, and must approve ferry service by other carriers.

SSA is managed by a five-member board, with 70 percent of the voting power assigned to Nantucket and Martha’s Vineyard, and 30 percent split between New Bedford, Falmouth, and Barnstable, a setup that has chafed off-Island members for several decades.

Mr. Hallstein is unclear on the SSA’s role. “Is it public or private? I’ve read the enabling act over and over. It reads like a war document in one sense, with inequality in voting rights. The SSA is clearly a stakeholder in this. We’d like them to send a representative to our meetings.”

SMART believes expansion of the SSA Woods Hole facility is not the answer. “The bridges and roads are not gonna change. Let’s think about changing the mode. I’ve been to SSA meetings and listened to the truckers. At most ports, they drop their cargo and go. They don’t get on the boats, because they only make money when they are rolling. They don’t make money when they are sitting,” Mr. Hallstein said. “We need to get all the stakeholders in the same room and work out sustainable solutions that meet the needs of all the stakeholders.” 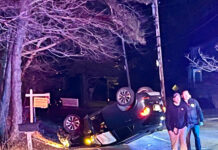