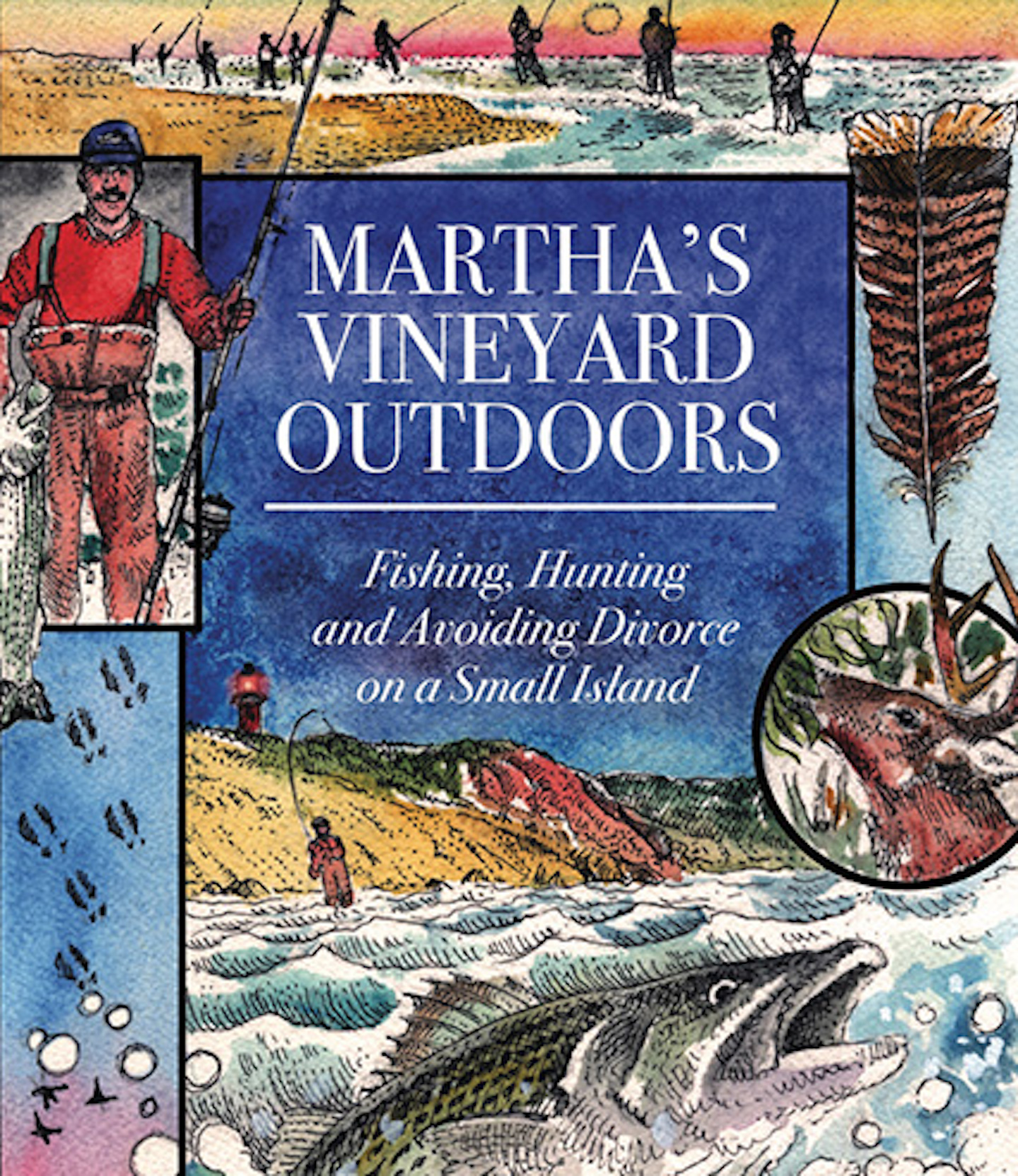 By Nelson Sigelman. 2017. $19.95. Available at Bunch of Grapes, Coop’s Bait and Tackle in Edgartown, and on amazon.com. Visit marthasvineyardoutdoors.com for more information.

Of course Nelson Sigelman asked graphic artist Glenn Wolff to design the cover of “Martha’s Vineyard Outdoors.” Wolff’s densely evocative work frequently enhanced Nelson Bryant’s outdoors columns, which appeared for nearly 40 years in the New York Times sports pages. Nelson of West Tisbury and the other Times, and Nelson of Vineyard Haven and the Island Times are similarly inspired storytellers. Wolff’s cover evokes, as Nelson Bryant’s columns did, and as Nelson Sigelman does in this new collection, the many dimensions of the Vineyard’s sporting life. It suggests the wealth of satisfying tales that have taken root over centuries in the traditional Vineyard practice of the fishing and hunting arts.

Still, it’s the words, the people, and their stories that elaborate and complete each picture. That was Nelson’s job while at The Martha’s Vineyard Times, and he did it faithfully, joyfully, as readers will certainly conclude from these selected, edited essays from his nearly 30 years of storytelling in the pages of our Island newspaper.

Nelson, from Dorchester via Southie, only moved to the Vineyard in the late 1980s — to sell advertising for The MV Times. He came to fish. The job, he reckoned, would pay for his fun. It did, and it led him to the beaches and the woods and the community of fisher- and hunterfolk. He was driven to begin a weekly fishing column. Then, his acquaintance with Vineyarders widening, he added news reporting. Then he added bird and deer hunting, and ultimately carefully researched, sympathetic, and intimate storytelling.

“As my outdoor experiences broadened, my column portfolio expanded to include deer hunting and duck hunting,” Nelson explains. “But mostly what I wrote about, whether fishing or hunting, was the character and characters of Martha’s Vineyard. Over the years I covered significant news stories, but it was the fishing and hunting stories that Island readers seemed to appreciate most, and for which I was known.”

Readers will understand at once that these columns were not written by an observer, a commentator, or a dilettante. He wasn’t flexing his imagination. He wasn’t guessing or following the crowd. He was on the beaches, stuck in the sand, patient in the duck blinds, up the tree. His were real-time, real-people stories. Oh, sometimes there were tips on promising places, or lures, or shotgun loads, or nurturing married life, or building blinds, or safely setting up tree stands. And he did occasionally write directly to big wheels, to tell them they could do better.

For instance: “I think it is time for the president to ditch the ‘Caddy Shack’ look (even if Bill Murray, Vineyard summer resident, is a member at the same course) and forego socializing only with people he can hang out with in Washington. The president should go fishing,” Nelson recommended to President Obama one August.

“Fishing is the great equalizer on Martha’s Vineyard. It does not matter,” he assures us readers. “If you are staying in a rented room in Oak Bluffs or a Chilmark compound, there is opportunity to have a great time casting under the stars from the beach at Wasque Rip or Lobsterville Beach.”

The presidents he tutored didn’t bite.

But really, the fishermen and women were the celebs, and sometimes the stories were laced with a saddening Breslin-esque intimacy and directness. For instance, Albert Angelone, fisherman. Nelson met Angelone at Coop’s Bait and Tackle Shop.

Mr. Angelone’s off-Island career had been as a Secret Service agent protecting presidents, running beside their limos, gun drawn. Nelson tells his story carefully and in detail. But Angie’s story was, for Nelson and his readers, a fisherman’s story of a good and modest man with a talent for friendship and for finding fish. He told this story in his column contemporaneously the week Angie died.

“Angie was a part of a Vineyard fraternity bound by a love of fishing. He left the house early to go fishing Saturday morning. When he did not show up for an appointment later that morning, Mary Ann contacted friends and fishermen and asked them to help locate her husband.

“By late afternoon, fishermen were looking around the Island’s beaches for some sign of his vehicle. Early that evening, acting on a hunch about where Angie might have gone, Cooper Gilkes and Robert Morrison went to a spot near Mink Meadows and found Angie. There is no sadness in the fact that he died on an Island he loved doing what he loved, but he will be missed.”

Will there be a place in the frantic, click-crazed, tortured, tweet-driven news media world for the sort of work Nelson did? He is doubtful.

“When I began working at The Times, we were a weekly. When I left in October 2016, we were essentially a daily — even an hourly. The increased emphasis on feeding the online news maw leaves me concerned that there will be less time for future columnists to devote to telling — really, passing along — full, rich stories, or whether newspapers will even welcome columnists to write about fishing, deer hunting, and waterfowling at all.”

Not only are these stories plainly and sensitively told, but they have been edited lightly enough so that readers will experience the immediate importance many of them had in the lives of Islanders. They were written as Island events and people lived their lives, and published in rhythm with their passing days.

For the record, Nelson and I were colleagues at the Martha’s Vineyard Times for nearly 30 years. He worked for me, and we are friends. He asked me for advice as he gathered the material for this collection, and I gave it. I am sure it was not influential. I read all of these collected columns over the years as he wrote them, as well as many others, and I approved them for publication. My admiration for his storytelling, his personal understanding of the sports and their practitioners, and his scrupulous, sympathetic treatment of the people he wrote about endures.