Sami Steigmann is a Holocaust survivor who, when he was 18 months old, was sent with his parents to a labor camp, where he was the subject of medical experimentation. According to a press release, he was released when he was 4 years old, and he tells the story of how he was at the point of death at that time, and it was a German woman who gave him milk and saved his life.

Mr. Steigmann grew up in Romania after WWII, in his hometown, which at different times was in different countries. He emigrated to Israel, where he worked as a mechanic for the Israeli Air Force, and from there came to the U.S. Despite his tragic history, he has an optimistic view of life, and as his website says, “I am not what happened to me. I am what I choose to be.” 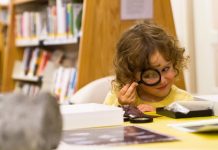 Ask the experts at Fossil Day