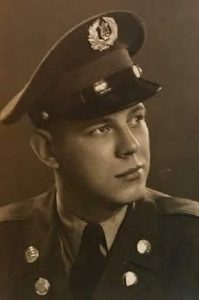 Lucian was born and raised in New Britain. He attended New Britain High School, where he was an avid violin player. After graduating from high school in 1948, Lucian joined the U.S. Army. While in the Army band he switched to the trombone, which he continued to play throughout his military career.

While touring in Europe, he met the love of his life, Caroline. They married in Salzburg, Austria, and had three children, all born in different countries: Fred in Austria, Sherry in the U.S., and Sue in Germany. When Lucian’s mother became ill, the family returned to the U.S., settling in New Britain. Lucian’s military career continued as he was stationed in Fort Devens in Massachusetts for four years, then Germany for two years, finishing up at Fort Polk, Louisiana, for the last 3½ years, retiring as a master sergeant E8.

Lucian leaves behind his beloved wife of 64 years, Caroline, of New Britain; his son, Fred Domont and his wife Lee of Edgartown; his two daughters, Sherry Rouleau and her husband Jeff of East Hampton, Conn., and Sue Kaeka and her husband Danny of West Tisbury; his six grandchildren, Ali, Jordan, Leolani, Fin, Eve, and Jenny, and his seven great-grandchildren, Ashley, Colleen, Katie, Grace, Andrew, Emma, and Page.

To extend condolences to the Domkowski family, or to share a memory of Lucian, please visit shakerfuneralhome.com.