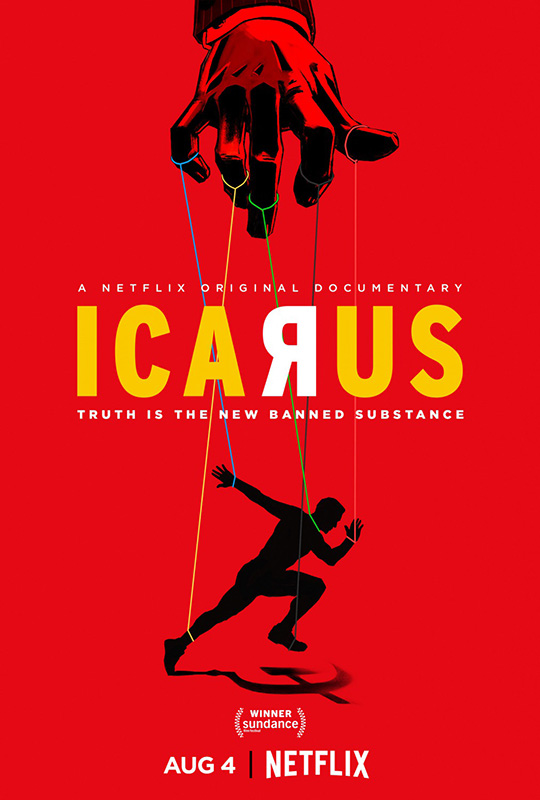 The documentary “Icarus” has all the elements of a spy flick, and has ties to Boston and Martha’s Vineyard via some the producers and director Bryan Fogel. It presents the kind of fictionalized scenario where the protagonist is unwittingly drawn into a world of intrigue. When actor and filmmaker Bryan Fogel set out to make a film investigating the effects of performance-enhancing drugs, using himself as guinea pig, he ended up uncovering a story about the Russian government–backed doping scandal that subsequently made front-page news.

In 2015, another documentary by an East German filmmaker prompted an extensive investigation, which unearthed widespread doping and cover-ups by the Russian authorities and led to Russia’s participation in the 2018 Winter Olympics being limited, and the Russian Olympic Committee suffering a temporary suspension.

Although viewers of the 2017 doc will likely be familiar with the scandal and its aftermath, what makes the film compelling is that not only was it filmed in real time — as the investigation was ongoing — the filmmaker himself ended up in the middle of the drama.

Fogel first met Russian scientist Dr. Grigory Rodchenkov, the director of Russia’s national antidoping laboratory, when the filmmaker was searching for assistance with his original plan of using performance-enhancing drugs and seeing how easy it would be to beat the system. During the course of Fogel’s recorded interviews and eventual meeting with Rodchenkov, the scandal was revealed, and the disgraced scientist, with Fogel’s assistance, escaped to the U.S., fearing for his life. (Another key player in the doping scheme died under mysterious circumstances shortly after the scandal was uncovered. Rodchenkov eventually brought his story to the New York Times as a preemptive tactic, to avoid being a target of Russian operatives intent on silencing him before it was too late.)

In “Icarus,” the scenario is played out for full dramatic effect, complete with anxiety-inducing musical score. Furthermore, Rodchenkov proves to be such a colorful and likable character that he charms the viewer into all but forgiving his misdeeds and casting him as a victim.

That’s one of the problems with the documentary. Fogel attempts to draw more from the story than is truly justified. The title alone is problematic. Rodchenkov is hardly an innocent pawn — like the Greek tragic figure — who allowed his ego or ambition to get the better of him. That’s really not the story. And although he is technically a whistleblower, Rodchenkov only spilled the beans when the facts were already on the table and his life was in danger.

Furthermore, the filmmaker tries to compare the situation to the scenario of the classic “1984” by George Orwell, in which the government persecutes individualism and independent thinking. Rodchenkov was a major player in the doping, and the film is a bit too sympathetic to the likable, at times downright goofy, Russian scientist. Toward the end of the doc, the now fugitive scientist is filmed reading sections of the groundbreaking dystopian novel, and then the filmmaker follows up with two sections based on the “1984” principles for survival. It’s a device that feels oddly out of place.

“Icarus” walked away with the 2018 Academy Award for Best Documentary Feature. No doubt people saw the doping scandal as an indication, if not a precursor, of other nefarious acts by the Russian government. However, through the overly dramatic music and other attempts to notch up the suspense, one has to remind oneself every so often that the issue at hand is cheating in sports, not an international incident of greater proportions.

“Icarus” is streaming on Netflix.