I’ve always had a soft spot in my heart for the Lambert’s Cove Methodist Church on Lambert’s Cove Road in West Tisbury. In 1988, when our son Max was a few months old, we decided to have him baptised at the church, which was very close to the house we had recently built. It was a hot and humid summer afternoon, and accompanied by a handful of friends and family, we headed down for the ceremony. We ushered ourselves in and sat down in the pews amongst about a dozen primarily older members of the congregation. Because of the heat, the front doors were open in an attempt to circulate some air.

I was seated on the aisle with Max on my lap when I noticed a large German shepherd lying on the floor to my left. He had wandered in through the open door. I casually reached down and began to pat him on the head, thinking, “This is a real Vineyard moment.”

A gentleman behind me leaned forward and whispered, “Is he bothering you?”

We took that as a good omen, a bit of filial and canine synchronicity, and from that moment we’ve always had a special attachment to the church. But now, after seeing what Neal Kaplan and Lisa Foster have done to renovate the church and parsonage, we don’t just have tender feelings — now we want to live there.

Kaplan and Foster are business partners from Providence, and they and their respective families have been spending time on the Island for years. Kaplan is a contractor; his company, Neal Estate, restores vintage buildings. Foster’s company, Reconstructure, specializes in interior architecture and design.

Always on the lookout for new challenges, Foster and Kaplan had their eyes on the Lambert’s Cove Church from the minute they first learned that it was for sale around 2006. The church was built in 1846, and operated until 1997. It had been purchased by Gina Stanley, proprietor of still another Island landmark, the Artcliff Diner. Stanley had replaced the cedar shingle roof and made a few smaller renovations, but soon realized there was a seemingly endless amount of work to be done, and her pockets weren’t deep enough to do a full renovation, so in 2008 she sold the property to Kaplan and Foster.

I jokingly said to Neal Kaplan, “What were you thinking?”

He said, “A lot of people were scared off by the scale of this project, but we do this for a business. People think we’re crazy, but I like the challenge.”

And some challenge it turned out to be. The property consisted of two buildings: the church (or sanctuary, as it is called), and the parsonage, as well as a small well house used for storage.

The parsonage
According to Wallace and Co.’ (which has the listing) realtor Janet Lee Scott, the parsonage pretty much had to be gutted. The construction notes kept by Kaplan read, “The granite crawl space was cracking, new insulation and oil heat had to be installed. The west portion of the house had to be demolished, the remaining structure lifted onto piers, and supported on steel I-beams with jacks, while a foundation space was excavated and a new concrete (floor) was poured.”

The wall along Lambert’s Cove Road was pushed out two feet, and a lofted ceiling was created in the living room to give it an airy, spacious feeling.

And because Kaplan and Foster were sticklers for authenticity, they insisted that the front façade remain true to the original building, preserving its historical integrity.

Forty tons of granite was brought in for the foundation walls and for the patio in back. Hydronic radiant heated flooring was used in all the rooms, Icynene spray foam insulation was installed in the walls, and all the windows were replaced with energy-efficient thermal windowpanes so everything is super-green, efficient, and functional.

Amenities include Ann Sacks tiled baths and concrete countertops in the kitchen, a soaking tub and a large glass shower, a full laundry in the basement, surround sound, and soothing designer lighting throughout.

A floating wood and steel staircase going from the basement to the second floor and many other contemporary finishing touches allow Kaplan and Foster to juxtapose the traditional and the modern.

The church, or sanctuary, was also in need of some serious repair. There was no plumbing in the original building. The rear end of the building was built out, and a bathroom was added. Underneath the addition, a new foundation was poured, the original crawlspace was trenched three feet, and the floor was resupported.

Back upstairs, water had damaged many of the floorboards, and they had to be removed, stripped, planed, and reinstalled. In the process of dealing with the flooring, Kaplan and Foster noticed that the front of the church floor was about six inches higher than the back. At first they suspected that there were rotten joists and the floor had just settled that way in the back, but upon further investigation they realized that the floor was intentionally built that way in order to give parishioners at the back of the congregation better sightlines to the front.

Another casualty of the leaking roof was a rusted decorative tin ceiling, one of the only fanciful design elements in the modest Methodist church. Kaplan and Foster had fiberglass molds made of the tiles, and whichever tiles were beyond repair were replaced by the fiberglass. In the end, they were indistinguishable from the originals. The floor was straightened out so marbles wouldn’t roll from one end of the room to the other.

Another part of the church that was in desperate need of repair was the belfry. Years of punishing weather and the weight of the 511-pound bell had caused the belfry to cant; new structural members were needed to shore up the tower. When looking at historic photos of the church, Kaplan and Foster noticed that the belfry originally had a tower cap, and that too was fully restored. The bell, a perfect C#, is still totally functional, and can be used as a grandiose way for guests to announce themselves.

Kaplan and Foster did their homework, and did everything possible to make sure that architecturally, the church and parsonage were historically accurate. But these are no museum pieces. Both buildings are bright, airy, luxurious  and meant to be lived in.

The Lambert’s Cove church is being offered at $1,675,000 through Wallace and Co./Sotheby’s, 508-627-3313. bit.ly/lambertscovechurch. The listing agents are Dee Moyer and Janet Leigh Scott. 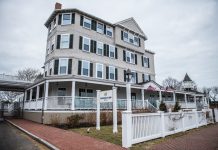 Harbor View in Edgartown is sold 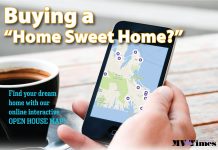