People know that people love Martha’s Vineyard. It’s in the name. Products with Chilmark, Menemsha, or M.V. on the label are immediately attractive to business owners and wholesalers. With about an 8-mile sound between Martha’s Vineyard and the mainland, it takes a few extra steps to get local products off-Island, or as many Vineyarders say, “to the rest of America.” Sometimes it’s worth it, and sometimes it’s not. The Times asked five Vineyard businesses how they navigate the venture of Island exports.

“We move one can at a time,” Offshore Ale owner Phil McAndrews said. Offshore Ale exports four styles of their Island-brewed beers to stores and distributors all over the state.

“Our distributor will give us an order for the month,” McAndrews said. “We’re shipping off-Island one to two times per month, and sometimes more during high beer-drinking season.”

According to McAndrews, the brewing, bottling, canning, sealing, and packaging is all done on-Island. “It can be pretty labor-intensive,” he said. In the summer, Offshore partners with Buzzard Bay Brewing in Westport to supplement their high volume of orders.

Each case is manually packed with 24 cans, and shipped through airport transport or Cape Cod Express.

Offshore’s East Chop Lighthouse Golden Ale, Menemsha Creek Pale Ale, Lazy Frog IPA, and Islander Double IPA can be found in liquor stores all over the commonwealth, and in restaurants on the Cape up to Provincetown.

“We’re still on a small scale relative to the beer business,” McAndrews said. “We don’t have unlimited production at this point, but I’d love to work toward that.”

McAndrews said the key to keeping up with the competition is engaging with the right market. “Smaller businesses can get lost in the shuffle,” he said. “It’s hard to get the time and attention from big stores. We look for stores that have a consumer base for craft beer, and we work on building those relationships.”

Grey Barn Farm is another business heavily involved in off-Island exports. Their main product is cheese — two-thirds of which ends up leaving the Island, according to owner Eric Glasgow.

“We have a couple different distributors, and a few different ways the cheese leaves the Island, depending on whom it’s going to,” Glasgow said. In many cases, according to Glasgow, he’s loading the wrapped and packaged cheese in his refrigerated truck, and bringing it off-Island himself.

Grey Barn Prufrock, Eidolon, and Bluebird can be found in stores all over New England. Ninety percent of orders are delivered by Glasgow himself.

“I don’t mind it,” he said. “In fairness, like everybody else, if there’s a reason to be off-Island, you try to be as efficient as possible. I usually make other stops relevant to the business.”

Heidi Feldman, owner of Martha’s Vineyard Sea Salt, says 75 percent of her product stays on-Island, and 25 percent is shipped off. Many of her off-Island exports go to states like Vermont and Arkansas, which have less sea salt.

According to Feldman, exporting isn’t her main goal. “Our main goal was to be a regional sea salt provider,” she said. “Our primary focus is Martha’s Vineyard, secondary is Cape Cod, and tertiary is regional.” Feldman ships two to three times per week during peak season, and uses USPS shipping.

For some small and local businesses, it makes sense to stay small and local. “It’s not a huge part of the business,” Stanley Larsen, owner of Menemsha Fish Market, told The Times. Larsen’s iconic up-Island fish market sells shellfish, lobster, and fish from local fishermen. The market is a destination for many tourists and Islanders who know fresh fish. Business is good on-Island, but the market deals with off-Island buyers as well. “Usually wholesalers,” Larsen said.

Exporting Menemsha Fish Market products takes place in a big refrigerated truck. Larsen sends his fish, usually bay scallops, on a truck going to the vicinity of where his buyer is. “They drop it off, and that’s that,” Larsen said.

In the peak season, shipments can pick up to two or three times per week. Bay scallops are their largest export, and they sell to wholesalers and a few select customers. “We don’t have the capacity or manpower to do it very much,” Larsen said.

Todd Christie of Chilmark Coffee dabbles in the world of off-Island exports, but similar to Larsen, it isn’t integral to the business.

Off-Island shipping is free for 30 bags of coffee or more. Christie said everything goes through U.S. Mail because he appreciates their customer policy: “If I get a box in the mail by 2:30 pm, I know it’ll be in Boston tomorrow.”

Chilmark Coffee is basically a one-man show. Christie gets help from his wife Jenny, but most of the physical day-to-day is handled by Christie alone.

Christie says he finds a real advantage in keeping his business small. “Better quality control,” he said. “I pretty much touch every bag that goes out on the shelf.”

According to Christie, Chilmark Coffee had an opportunity to be sold in Whole Foods three years ago.

“We were supposed to be in all stores in southern New England,” he said. “It sounded like an amazing thing. But for my business, it didn’t work.”

Larger businesses establish wholesale prices, which generally bring down the price of the product. Whole Foods ended up pocketing a much larger sum per sale than Christie.

“Eighteen cents per bag is not worth it,” Christie said. “It may put my coffee in the hands of other people, but at what expense?”

Christie values quality of product and quality of life over the bottom-line dollar. He likes being a local business, and selling his product to other local businesses. “I like shaking the hands of people I do business with,” Christie said. 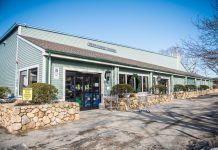