Leona (“Nonie”) Coleman Flu, longtime Oak Bluffs resident, died on the evening of Thursday, May 24, 2018, surrounded by her loving daughters. She was 94 years old. 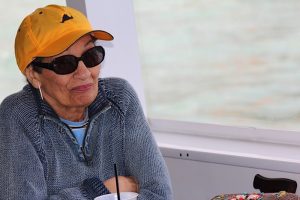 Leona was an avid artist, and a part of her collection will be on exhibit at the Martha’s Vineyard Museum. Leona first came to the Vineyard in 1940 with her parents, Luella and Ralf Coleman, and they enjoyed summers in their Oak Bluffs home, which is on the African American Heritage Trail of Martha’s Vineyard. Leona became a year-round resident of Oak Bluffs in the 1970s, until moving to Atlanta in 2015 with her younger daughter.

A memorial service is being planned in Oak Bluffs for August.