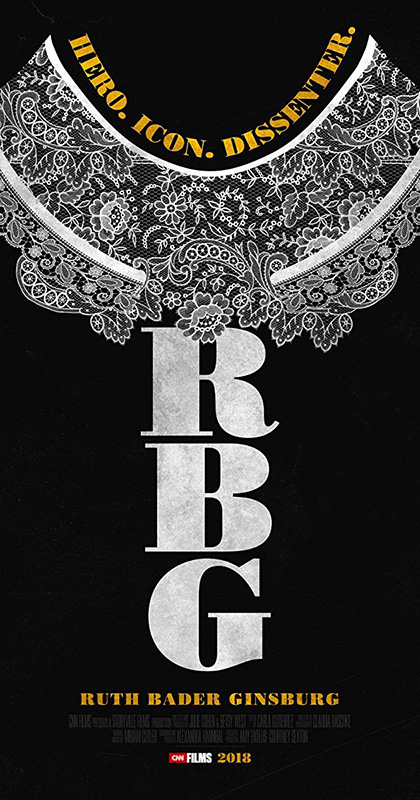 The Ruth Bader Ginsburg documentary “RBG” opens at the Martha’s Vineyard Film Center this weekend, starting Thursday, May 31, at 6:45 pm. Not only is Ginsburg associate justice of the Supreme Court, but she’s also a pop culture icon, and her documentary, released May 4, has been critically acclaimed.

NPR correspondent Nina Totenberg, who is interviewed in “RBG,” will join Vineyard law firm Reynolds, Rappaport, Kaplan & Hackney via Skype for a discussion about the film. Directors Betsy West and Julie Cohen, both Emmy awardwinners, rely on interviews, public appearances, and archival footage to flesh out the life and accomplishments of Justice Ginsburg. A wine and cheese reception will precede the film. The event is sponsored by Reynolds, Rappaport, Kaplan & Hackney.

“RBG” opens with a list of epithets used by the justice’s detractors, including “witch, evildoer, monster, and zombie.” President Trump called her “an absolute disgrace to the Supreme Court.” What follows, though, ignores such criticism to celebrate this remarkable woman, who has rewritten the rules defining American heroes and championed women’s rights. Now 85 years old, Justice Ginsburg has served on the bench since 1993 as the second woman appointed to the Supreme Court, after Sandra Day O’Connor.

She was raised in Brooklyn by Russian Jewish immigrant parents. She met her husband, the late Martin Ginsburg, at Cornell University, where she earned her undergraduate degree. She attended Harvard Law School, where she was one of nine women in a class of 500 men. It was the mid-1950s.

When her husband took a job as a tax lawyer with a New York firm, Ginsburg transferred to Columbia Law School, tying for first in her class. She was a professor at Rutgers University after law school, and was paid less than her male colleagues because of her husband’s income.

Perhaps more important than the discrimination she overcame is her long list of accomplishments. She co-founded the Women’s Rights Law Reporter, the first U.S. law journal focusing on women’s rights, and founded the ACLU’s Women’s Rights Project. Once nominated to the federal bench by President Jimmy Carter, she began a campaign for women’s equality. Of the six sex discrimination cases she argued before the Supreme Court, she won all but one. Supreme Court cases include U.S. v. Virginia Military Institute, where she helped break the barrier against women students. Although in Ledbetter v. Goodyear Tire she lost an equal-pay case, Congress later passed the necessary legislation.

Ginsburg was appointed to the Supreme Court by Bill Clinton in 1993. She was known as a consensus builder, until conservatives took over and she became an eloquent and outspoken dissenter. In the court’s adverse decision against parts of the Voting Rights Act, she wrote that it was “like taking away your umbrella in a rainstorm because you’re not getting wet.”

Despite bouts with colon and pancreatic cancer, she has remained active, working with a trainer twice a week. In “RBG,” the justice shows off her collection of white collars for Supreme Court appearances, and has enjoyed cameos in operas that she often attended with her friend Justice Antonin Scalia. In 2015, MSNBC reporter Irin Carmon and then law student Shana Knizhnik teamed up to write a book titled “Notorious RBG: The Life and Times of Ruth Bader Ginsburg,” comparing the justice to the rapper Notorious B.I.G. A fictitious film about R.B.G. starring Felicity Jones and Armie Hammer is due out this fall.

For more information on this film and others at the Film Center and Capawock Theater, visit mvfilmsociety.com.