Above the bend of Basin Road, sandwiched between Fo’c’sle Locker and the Beetlebung Corner Store, you’ll find Menemsha Deli, an eatery worth visiting. Owner Cybele McCormick may be new to the Menemsha business community, but she isn’t new to professional cooking. McCormick owned Zapotec in Oak Bluffs, and prior to that, she was the personal chef of news anchor Walter Cronkite. She opened Menemsha Deli on April 24 after completely redoing the kitchen. While she admits to crafting a soup now and then, and loves to make salads, the kitchen is really oriented to one goal, sandwiches. These sandwiches come wrapped in no-frills deli paper, sub-style.

At one of two farm tables situated on either side of the counter, my fam and I sampled three of McCormick’s sandwiches.

Curried Chicken Salad, $14.95, can seem a reflection of heavy-handed kitchen work: too much salt, too much curry, and an unpleasant union of lumpiness and squishiness. You won’t encounter that kind of curried chicken salad at the Menemsha Deli. McCormick’s comes in a spinach wrap. The flavors are balanced — light-handed with the salt, evenhanded with the curry, nuanced with cilantro and cucumber. The cucumber also adds crunch, and balances the texture of the sandwich. Hands down the best curried chicken salad sandwich I’ve ever eaten.

We also tried the Barbecued Pulled Pork, $14.95. Your correspondent only experienced this sandwich vicariously. A direct quote from my wife: “Mmmm, so good.” McCormick said she cooks the pork for five hours. The marinade ingredients are secret. She heaps the pork on homemade coleslaw, and intersperses homemade pickled cucumber. That sandwich did not last five minutes.

On to the real expert at the table, who tried the Kid’s Grilled Cheese, $2.50. The toughest critic, 3-year-old Electra, has refused many a sandwich. When presented with a pressed grilled cheese oozing with American and provolone, she picked it right up, started taking big bites, and hummed with delight. Major success!

A few days later your correspondent returned to McCormick’s counter and tried the Menemsha Deli Cinnamon Coffee, $3.75, which was heavenly, and a Pastrami-Smoked Lox and Bagel Sandwich, $16.95. The lox were smoked in the same method used for pastrami. The fabulous pastrami flavors in the lox and the lemony cream cheese on the bagel were a semi-religious experience. Highly, highly recommended.

On weekends McCormick creates salads with homemade dressings like Asian cucumber and Caesar. As the summer rolls on, they may be available more frequently. 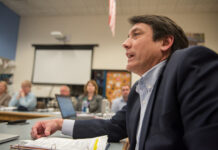