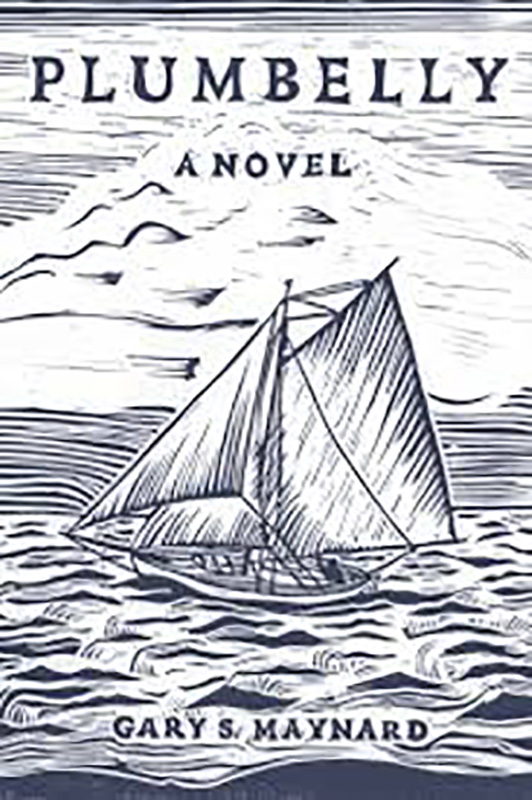 As a child, the ocean sailor, boatbuilder, and homebuilder Gary S. Maynard of West Tisbury sailed around the world with his parents, aboard a wooden boat his father built. All grown up, he and his wife Kristi and their two children left Vineyard Haven to roam the Caribbean and the Pacific aboard the wooden 45-foot ketch-rigged Scottish Zulu fishing vessel Violet, which he had converted into a family yacht.

Now Gary has built a coming-of-age novel set at sea in the South Pacific, where the dramatic ingredients include racial hostility, paternal abusers, molestation, shipwreck, three deaths (one a murder), and teenage heartbreak. At least some of this refashions experiences with which Gary is familiar. It is not a memoir, although it may have begun as one.

“It’s not a memoir, but my own experience certainly informs it,” Gary said in a telephone conversation this week about “Plumbelly,” his first fiction. “The vast majority is fictional. Gabe’s character is more of an alter ego of me, someone looking back on himself. I didn’t have a storyline, I didn’t have an outline, so the characters developed as the story emerged and took its own direction. They tell the story.”

Fifteen-year-old Gabe is the narrator. His own family sailing voyage ended in Tongu Harbor. Gabe’s father bullied and abused him mile after nautical mile on their journey. His mother is meek, and does not protect him. The Polynesian natives of Tongu harassed him. The head of the island’s mixed-race school keeps children in line with a cricket bat. Gabe’s best friend Lloyd is beaten mercilessly with his minister father’s belt. And Tanya, blond, free-spirited, wise beyond her 16 years, is oppressed by her Irish Catholic father.

Plumbelly, a plump, round-bilged, double-ended wooden sloop, becomes the essential metaphor for the novel’s journey. She found her way to Tongu, as Gabe and his family had. She has already killed Ohio Dave, her solo-sailing owner. Eventually salvaged by Gabe and Lloyd, Plumbelly becomes the inspiration and the vehicle for the three friends to escape.

Tanya set her sights on Gabe, who, though shy at first, knows a good thing when he finds her and joins up fiercely before very long. Young, lovely, and independent, she becomes the emotional leader and the adhesive among the three friends. She moves the lovemaking along, stiffens Gabe’s sometimes wavering self-confidence, and makes hard decisions that Gabe without her might avoid. She is a more potent character than her billing as a supporting cast member suggests. The night they slip away, Gabe sneaks around to Tanya’s house, to tell her that he and Lloyd can wait no longer to flee:

She was wearing an oversized T shirt, and she stretched it down over her knees.
“We have to leave tonight.”
She stared at me.
“Why?”
“It’s not safe here anymore for Lloyd,” I said. “Or me.”
“What are you talking about?”
It hit me how ridiculous I was, a skinny kid in worn-out clothes looking in the window of a beautiful girl on a dark night and asking her to sail away in the deep Pacific on a tired old boat with no money, no plan, no way home. I listened to my heartbeat and our breathing and turned away and looked up at the dark hillside.
“I understand if you can’t come,” I said.
“Don’t be an ass,” she said. “Give me a sec. I need to pack.”

Much of Gabe’s story is told in dialogue among the fleeing sailors. Speaking to one another, they sound like teenagers in flight from problems at home and excited at the adventurous nature of their escape. Their raillery sounds familiar — juvenile, but lively and affectionate. Their commitment to one another is conclusive. In these conversations, 15-year-old Gabe’s voice is often petulant, pleading, confused, and timid. But speaking directly to the reader, Gabe’s voice is different. He is grown up and sailorly. He sounds more like his creator, in command and at peace as his vessel, in perfect symphony with the ocean, the wind, and her master, presses upwind and farther from home.

I held the tiller in both hands, feeling the boat tugging hard as she pitched into the head sea. I sensed the rush of water under her lee bow and the lift as it passed under the turn of the bilge, felt the smooth flow of current tucking into the hollow of her stern and over her rudder blade. Plumbelly navigated the interface of two worlds, her mast and sails reaching up to grasp the winds of one, her hull gripped in the deep currents of the other. I eased the mainsheet a fathom or two and hardened up the jib, and the force on the tiller lessened and the boat steadied out on her course.

Unlike the boats or the houses Maynard has built, “Plumbelly” was a decade in the making. “I wrote nonfiction, for Wooden Boat magazine, a bunch of times, but this was my first foray into fiction. I intended it as a seagoing novel that would appeal to people who were not sailors,” Maynard said. He added that the story and the characters changed as draft followed draft.

This is not “Riddle of the Sands,” a small-boat sailing espionage adventure set under the loom of war. “Riddle,” widely considered the capstone of small-boat sailing literature, is written for sailors for whom the navigation, the seamanship, the mastery of currents and tides, and the political strategizing are compelling, not mystifying. “Plumbelly” is not “Master and Commander,” with colossal naval battles, broadsides, grappling hooks, and Gilbert and Sullivan uniforms. It is not “Sailing Alone Around the World,” one extraordinary sailor’s smuggish ocean sailing travelogue. And, importantly, it’s not a soft-serve teen soap opera.

If these are the available categories, “Plumbelly” doesn’t fit. It’s less technical than “Riddle,” less histrionic than “Master and Commander,” less global than “Sailing Alone,” and grimmer than a soap. It’s a story of young people finding an unusual way through a thicket of problems and opportunities, and learning the heartbreaking truths of life, love, loss, and making a break for it.