In July the Fred Rogers film “Won’t You Be My Neighbor?” passed the $20 million mark in ticket sales, an all-time record for a documentary.

True to its subject, the riveting portrait offers heart and wisdom. Hats (and sneakers) off to director Morgan Neville for capturing the charm and extraordinary vision of the soft-spoken TV star, who served as the moral compass for several generations of American children.

But say it again: Fred Rogers as box-office gold?

Further proof: “You Are My Friend,” a Sony TriStar feature, is now in production, starring Tom Hanks as the inimitable Mr. R.

With all the media buzz, I feel compelled to reveal my curious Fred Rogers relationship, which started in 1954.

I grew up near Pittsburgh, where the new “educational” TV station WQED had just started broadcasting. They did a live afterschool, mostly puppets show called “The Children’s Corner” with a bubbly and pretty host, Josie Carey, who talked to the puppets, all of whom seemed to have engaging issues and a similar (i.e. Fred Roger’s) voice.

My sister Mary Ann (7) and I (8) were immediate fans. My brother Mickey (12) was less interested, though all three of us soon became card-carrying members of the Tame Tiger Torganization, certified by the signature of Daniel S. Tiger, TTT president, on our cards.

When I sent in an entry to the show’s “Draw What You Did Last Summer” contest, I was shocked to see, right on our own Du Mont black-and-white TV screen, my own rendering of a boy in a striped T shirt shooting a bow and arrow! Epiphany time for an 8-year-old!

Ten days later my prize arrived in the mail: a giant, battery-powered fire truck with a long ladder that extended and rose three feet up from the truck!

Fast-forward 30 years. On Thanksgiving weekend 1984, as I waited for my suitcase in the Greater Pittsburgh Airport after my flight home from Boston, I looked across the baggage carousel and saw Mr. Rogers. Could it be?

I approached him and thanked him for the fire truck from three decades before. He was tickled. When I told him that I worked as an emergency physician, he seemed genuinely curious. “That is such an important ministry,” he said eagerly. “Did you happen to catch our show about emergency rooms?”

He grinned again and told me that he had just flown back from Washington, where he had presented one of his red sweaters, knitted by his mother, to the Smithsonian. I could see he was proud of the honor.

We promised to stay in contact, and a week later I received a cordial note from him on his trolley stationery, along with several autographed pictures, one of his books, and a trolley car patch to put on the shoulder of my hospital jacket.

There’s more: A month after our meeting, I got a call in Boston from TV Guide: “We’re doing an article about Fred Rogers. He’s been on TV for 30 years, and he says you were one of his first viewers. Would you mind giving us a few comments?”

A month later I dropped into my travel agent’s office to pick up tickets for a flight to Mexico. Stapled to my ticket was the article from TV Guide.

My agent stood up with big eyes and a tremor in her voice and whispered, “Is this really you? Are you his friend?”

I did become his friend. We exchanged phone calls and letters. I sent him copies of Alpha-Bete, a free-form sheet, which a posse of artistic friends and I published. I sent him postcards from the Caribbean, where I cruised as a ship’s doctor. He invited me to visit him and his family at his “little crooked house” in Nantucket, but our schedules never jibed.

One year I sent out gag invitations to a piano recital I was giving in my home at four o’clock on New Year’s Day. I called it “The Piano Bowl — Beethoven versus Yukevich.” Ten minutes before I was to sit at the piano, my phone rang. It was Fred. “Who’s winning, Yukevich or Beethoven?” he teased.

Though I had only met him face-to-face one time, being a “personal friend” of Mr. Rogers carried tremendous cachet for me with pediatric patients in the emergency room. Occasionally, I would drop his magic name to a frightened 5- or 6-year old, and suddenly I had near celebrity status. The parents were never impressed, but the children were, and knew they should like me.

People used to ask me, “Is he really all that good a person?” As described, I did not know him intimately. But one story I heard from my brother’s organ teacher in Pittsburgh tells exactly who Fred Rogers was.

For years my brother took organ lessons from this wonderful man in Pittsburgh, who was a close friend of Fred Rogers and who told me his own story. The organ teacher’s son had run into a string of emotional problems involving substance addiction, which led to many problems, financial, legal, and otherwise tragic, for his parents over many years.

In his early 40s, their son developed incurable liver failure, and one night his parents kept a long vigil in the ICU of a Pittsburgh hospital and watched their boy die.

Physically exhausted, emotionally spent, at dawn the grieving couple thanked the doctors and left the hospital. They drove home silently and in tears. When they got out of their car, who was sitting on their front step with coffee and doughnuts?

The guy who sent me the electric firetruck.

As a member of the Tame Tiger Torganization, I have a small, staple-bound book published by Josie Carey and Fred Rogers in 1954 called “Our Small World.” The book contains articles, illustrations, recipes, jokes, French lessons, a play, and several songs.

The final song, “Goodnight God,” is accompanied by a picture of Daniel S. Tiger kneeling by his bed to pray. The last stanza goes:

Keep us safe and happy, God.

Tell us what to do.

Goodnight, God, and Thank you, God,

For letting us love you.

One of the compelling phrases in “Won’t You Be My Neighbor?” is Mr. Rogers’s description of the space between the TV screen and the child as being sacred: “We can do a lot with that space.” It is easy to lament how in recent decades we have allowed that sacred space to be taken over by commercial propagandists. These forces have certainly done a lot with that space, mostly mischievous, and at what cost to our society and to the American soul?

So, thank you, Fred, for being our friend and our moral compass, and thank you, ever so much, for letting us love you.

Dr. Gerald Yukevich is retiring as of September from Vineyard Medical Care. He is a director at Hope Hospice.

The ringing of the bells 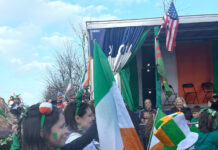