Real Estate Confidential is a weekly chit chat about new listings, sales, or other insider info on the Martha’s Vineyard real estate market, by Fred Roven, Martha’s Vineyard Buyer Agents. It appears each Friday in The Minute.

Tucked away from the glitz and glitter that is Circuit Avenue in Oak Bluffs sits the Martha’s Vineyard Camp Meeting Association (MVCMA) often referred to as The Campground. To step into the Campground is to step back to a possibly more civilized time. The year was 1835 and, in what was then named Wesleyan Grove, a Methodist Camp Meeting, which was becoming common around the country, was held. Early attendees described the land as a “venerable grove of oaks” in the middle of a sheep pasture. The land sloped gently to a white sand beach and included a freshwater lake. The benefit of sea air and social interaction revived both mind and body. An association was formed “for the purpose of maintaining annual religious meetings on the island of Martha’s Vineyard.” That association has evolved into what is now a community that welcomes people of all faiths. The association has always been autonomous and never affiliated with any church conference.

In those early days attendees brought tents; later tent platforms were built and attendees returned to the same spot every year, and finally in 1859 the first permanent cottage was constructed on one of those platforms. The cottages are built of tent-frame inspired construction with vertical tongue-in-groove boards which formed the interior and exterior walls. A wide double door faced the front, reminiscent of tent openings. The front room on the second floor also had a set of arched top double doors leading to a small balcony. Upstairs furniture was brought in through the balcony and double doors. The gingerbread trim was milled at the site of current East Chop beach Club. Porches and porch roofs were added later in the mid-1880’s. The original architectural form of the Martha’s Vineyard Cottages, most of which were built from 1860 to 1880, was a new American building type; the “Martha’s Vineyard cottage” with its gingerbread trim, front and back rooms, and distinctive double doors were most likely an invention of local carpenters to fit the tent sized platforms that already existed. The Campground expanded to 570 platforms in 1868 and as permanent structures were built and smaller platforms combined the total now stands at 318 cottages.

The Campground is important historically for several reasons. The unique circular road layout similar to many campmeeting sites: a central circle — Trinity Circle surrounding The Tabernacle — with concentric circles of streets around it and cross streets leading to other smaller concentric circles. To be honest, I still get lost trying to figure it all out. Over the years water pipes were laid and sewers installed and all cottages are now equipped with all the modern conveniences of today’s world.

In the beginning, a large tent was placed in the middle of Trinity Circle for prayer meetings, to be replaced in 1879 with the current steel structure, The Tabernacle. The iron Tabernacle is an extraordinary 19th century building. The soaring arches and unique iron construction make it one of the most artistic buildings in America. Iron was used when built in 1879 because it was less expensive than wood. Lastly, it is historically important because of the remarkable state of preservation. In 2005, the entire 34 acres of the MVCMA along with all the buildings was designated a National Historic Landmark.

The MVCMA offers a wide variety of cultural and religious programs throughout the summer season. The tabernacle is the largest venue on Martha’s Vineyard with marvelous acoustics and a beautiful setting for the many concerts held there. I am not a particularly religious person but whenever I enter and see the banner proclaiming “God is certainly in this place,” I nod in agreement.

In 1867, fearing irreligious contamination from the growing community surrounding the campground, a 7’ high picket fence was built around Wesleyan Grove with gates that were locked at night. One night a year the division between attendees and the outside world disappeared. In 1869, the Oak Bluffs Land and Wharf Company, which developing a resort around Ocean Park, sponsored the first Illumination Night there. Soon, the celebration moved to the Campground. Everyone took part and there was no distinction between the resort, and Circuit Ave., and the Campground; between Methodists, Presbyterians and Baptists. Early lanterns that decorated the cottages on Illumination Night were lighted with candles, with the earliest lanterns being brought to the Island by sailors and whalers from the Far East. Most are now electrified and their lighting every year is truly a sight to behold.

There are only a handful of cottages on the market right now. You can view them all at Martha’s Vineyard Camp Meeting. One that certainly stands out above the rest is a waterview campground cottage on Siloam Avenue overlooking Sunset Lake with views out to Oak Bluffs Harbor and jetty Beach. Sit on the front porch surrounded by gingerbread trim and hanging flower baskets, enjoying the water views, cool breezes plus the brilliant colors of the sunset across the water as the summer energy of another day draws to a quiet close. The interior features an open floor plan and the master bedroom on the second floor includes a full bath plus a balcony overlooking the water and harbor.

Make your Martha’s Vineyard dream lifestyle a reality — vacation a short distance to public beaches, shopping & dining, public parks, ferry, everything downtown Oak Bluffs and the Harbor area offers. This week’s slides are from the restored cottage on Siloam Avenue, a recently renovated and modernized cottage showing the possibilities of what can be, and some historic Campground and cottage photos. 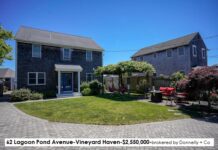 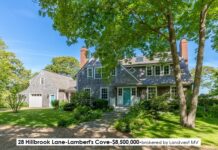 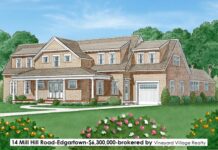