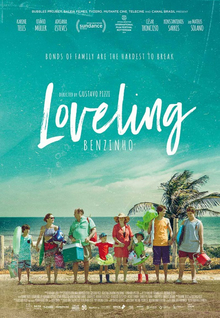 Three films featured during the Martha’s Vineyard International Film Festival will screen this weekend as part of the festival’s schedule. “Loveling” from Brazil plays Friday, Sept. 7, at 4:30 pm at the Capawock Theater. “The Last Suit” from Argentina plays Sunday, Sept. 9, at 12 pm, followed by “The Family” from Venezuela at 2 pm at the Film Center.

In the film “Loveling,” Irene lives with her husband Klaus outside Rio de Janeiro with their four children. The couple has been trying to build a new house, but continues to struggle. Irene works as an independent seller, and Klaus owns a small copy shop — both are struggling businesses. Klaus tries to find new sources of income.

The family also spends time at their beach house, enjoying time spent by the water together. One of the film’s especially beautiful shots is an overhead of Irene and her oldest son Fernando curled up on a tube on the water.

Back at the house under construction, the front door gets hopelessly locked, the sink explodes, and other mishaps occur to represent the daily struggles this family faces. Irene finishes her studies and receives her high school diploma, hoping it’ll enable her to get a better job.

Everything changes when Fernando is invited to play professional handball in Germany, a sport reminiscent of American basketball. Irene is not ready to part with her oldest son, and the film sequences a number of flashbacks of her playing with Fernando as a little boy. This Brazilian family is full of life, and “Loveling” captures it with affection and humor. “Loveling” was nominated for the Grand Jury Prize at the 2018 Sundance Film Festival.

In “The Last Suit,” 88-year-old Abraham Bursztein is not happy about how his daughters have sold his house and plan to put him in a retirement home. Bursztein is a Jewish Holocaust survivor, and has strong survival instincts. Rather than ending up in a retirement home, he packs his bags and heads for Poland, where he plans to find his Christian friend who saved him from death at the end of World War II. Along the way, he has many adventures and misadventures.

On the way to Madrid, his seatmate Leonardo ignores Bursztein’s attempts to engage in conversation. The desk clerk at the hostel he stays at is also rude, but Bursztein accompanies her to a café where she sings. As he heads back to his room at the end of the night, Bursztein discovers all of his money has been stolen.

Reluctantly, he goes to see his estranged daughter who lives in Madrid, and apologizes for their falling-out. He asks for money to get him on the train to Poland. Flashbacks help fill in the details of Bursztein’s early life, his concentration camp escape, his little sister who was killed by the Nazis, and his return to what had been his home growing up. During his journey to Poland, each of the people he meets along the way becomes fond of him. Bursztein ends up in a hospital, and a nurse agrees to help him find his Christian friend. “The Last Suit” offers a compelling portrait of a brave and determined man.

“The Family” is a gripping, hardscrabble story of what happens to a father and his 12-year-old son, Pedro, who stabbed another boy to death. With gang members sure to retaliate, the two escape, seeking safety in a variety of places. Pedro is a tough kid, and Dad has his own issues, but they learn how to rely on each other. In the process, they become a true family. Both are fully developed characters, sure to keep the viewer’s attention.