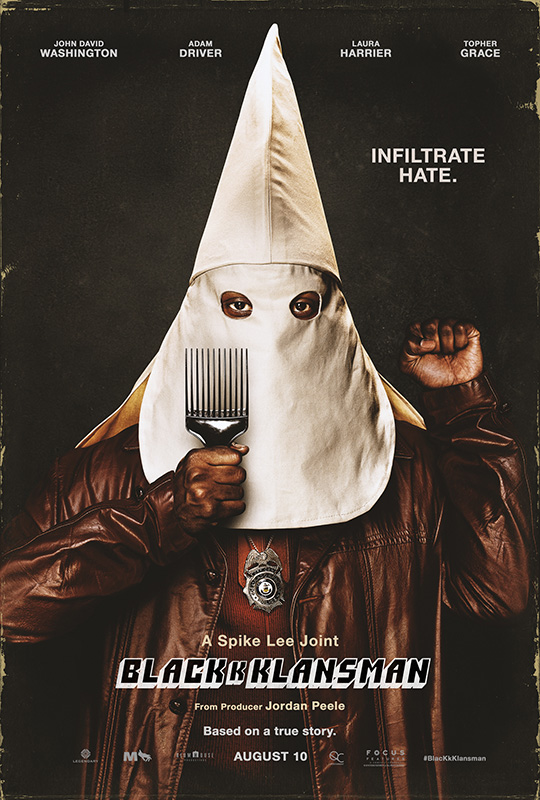 A good film is one you’re thinking about days, sometimes weeks later. I found this rang true after seeing Spike Lee’s most recent blockbuster, “BlacKkKlansman,” a film inspired by the true story of Ron Stallworth, a black police officer from Colorado Springs who infiltrates the Ku Klux Klan.

It’s been about a month since the film hit theaters, and a couple of weeks since I finally saw the Spike Lee joint. Lee is a seasonal Islander as well as a renowned director. His films are often called “joints,” and they typically address controversial racial, social, and political issues. They’re loaded with humor, satire, ironies, and subtle winks from the director. In the opening credits, words flash across the screen in typical Lee parlance: “Dis joint is based upon some fo’ real, fo’ real sh*t.”

Wounded Confederate soldiers lie on the ground as the camera pulls back and upward, revealing hundreds of soldiers as far as the eye can see. This opening scene represents what happened about a century earlier, where Confederate soldiers fought the Union and lost. Another message from Lee: This battle has been fought and lost before.

Then we’re brought to the soulful days of the early 1970s. Ron Stallworth, played by John David Washington, Denzel Washington’s son, applies to join the Colorado Springs Police Department. When he’s hired, the chief reminds Stallworth he’s the “Jackie Robinson” of the force, and to be prepared for racism and ignorance from society as well as fellow officers.

The department decides to put Stallworth undercover to attend a black rally held by the Colorado College Black Student Union. Police think the town could be on the brink of a race war, and wire Stallworth to obtain intel.

“Are you ready?” the chief asks Stallworth.

The rally is peaceful and empowering, and the audience hangs on every word. Stallworth connects with the Black Student Union president, Patrice, and the two develop a friendly, political, and romantic rhetoric throughout the film.

Stallworth reads the newspaper at his desk the next day, and he finds a telephone number for the Ku Klux Klan, or “the organization.” He speaks with Walter, Ryan Eggold, the Colorado Springs chapter leader. Stallworth says he’s interested in joining, and gives a very believable and candid monologue as to why he hates Jews, black people, Italians, and everything in between. This is where the ironies start rolling in hot.

“You are just the kind of guy we’re looking for,” Walter says.

This is the beginning of Stallworth’s infiltration of the KKK. He gets Zimmerman to play white Ron Stallworth, who’d handle all the in-person aspects of the investigation, while black Ron Stallworth continues to nurture over-the-phone relationships with the chapter, as well as with national leader David Duke.

“Do you really think we can do this?” the chief asks.

Stallworth responds, “With the right white man, we can do anything.”

This tone sets the pace and sense of humor throughout the rest of the film. It flips between white Ron Stallworth and black Ron Stallworth, and a continuing investigation and infiltration of the KKK. Radical, heavy, and racially charged concepts are covered, but seethed in ridiculous ironies. It’s impossible not to laugh throughout this film.

I found myself considering the concept of brotherhood as it’s used: Black brothers and sisters, police brotherhood, and Klan brotherhood. “We’re a family,” Walter says of the KKK. And later, when commenting on white supremacist attitudes of certain cops, Zimmerman said, “We’re a family. Right or wrong, we stick together.” At what point does brotherhood stop being an excuse for intolerable behavior? This is a question Stallworth considers throughout the film as a black brother, a cop, and as a fake member of the KKK.

The film score beautifully accompanies the cinematic progression, and captures the emotion and mood of scenes as they unravel. White heritage. White freedom. Ethnic cleansing. We like to think of this as a reality that once was, but this film is threaded with truths of today. Fifty years later, we’re not so much better off than we used to be.

Throughout the film, violence, protests, and rallies are remade by Hollywood. It’s based on true accounts of what was. But at the very end of the film, viewers are left with a haunting transition to what is.

Real footage from Charlottesville in August 2017 is shown. Confederate flags wave and white supremacists parade the streets chanting “White power,” “White lives matter,” and “Jews will not replace us.” Violence, hate, and earth-shattering screams are all a portrayal of today — this generation.

The film closes with a photo of Heather Heyer, the victim of the Charlottesville rally in 2017. The screen fades to an upside-down American flag that dims from red, white, and blue to black and white. Lee offers his viewers a chilling and challenging reminder that the past is not so far behind us.