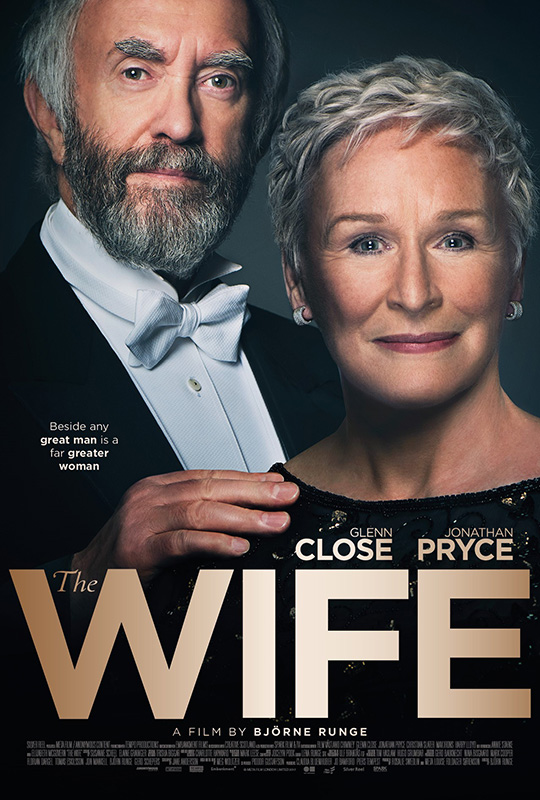 “The Wife” opens this Friday, Sept.14, at the Martha’s Vineyard Film Center. It stars six-time Oscar nominee Glenn Close and veteran actor Jonathan Pryce. The film is an evolving domestic drama, based on the 2003 Meg Wolitzer novel of the same name. Swedish director Björn Runge directs the film.

The opening scene of “The Wife” introduces Joe and Joan Castleman lying in bed. Joe pursues sex with his reluctant wife. When the phone rings, it’s a Nobel Prize representative informing Joe, a great American novelist, he’s won the 1992 prize for his acclaimed body of work. A celebratory reception shortly follows the opening scene, and viewers meet the Castleman children. Susannah (Alix Wilton Regan) is pregnant, and David (Max Irons) is an aspiring writer.

The film proceeds with flashbacks of Joe as a young professor (Harry Lloyd) at Smith College in the late 1950s, and Joan (played by Close’s daughter, Annie Starke), his student. Joan has her own talents as a writer, and informs Joe that the characters in his novel are wooden, a criticism that surprises him, but which he takes in stride. Eventually, the two marry.

Returning to the present, Nathaniel (Christian Slater) appears on the scene with aspirations of writing Joe’s biography, much to Joe’s annoyance. Actress Elizabeth McGovern plays a cameo role as writer Elaine Mozell, who cynically warns Joan that the field of literature is dominated by men.

It begins to be clear that a lot is going on beneath the surface. While playing the dutiful and supportive wife, Joan remains buttoned-up and aloof. David is resentful and angry at his unsympathetic father, who insists, “You shouldn’t need my approval to write.” After the three arrive (Susannah stays at home with her new baby) in Stockholm for the Nobel Prize ceremony, Joan warns Joe not to thank her in his speech, a request he ignores. The Nobel committee condescendingly offers Joan opportunities for shopping and beauty treatments.

A new wrinkle in the drama arrives as photographer Linnea (Karin Franz Körlof) is assigned to work with Joe. Joan is well aware of her husband’s philandering history, and as expected, Joe begins to flirt with Linnea. Nathaniel continues to pursue his attempt to win permission to write Joe’s biography, this time trying to enlist Joan. As she smokes and drinks with Nathaniel, Joan reveals another side of herself. The arguments in the family that have festered escalate, with Joe denouncing Joan as “a prissy, privileged co-ed.”

As the story reaches its climax, family tangles begin to unravel in dramatic ways. “The Wife” relies heavily on a cast of talented actors, in particular Close, who gives depth to Joan in a film that proceeds primarily through dialogue. In the era of the #MeToo movement, “The Wife” will help viewers see how the role of women has evolved into more assertive and independent ways.

For more information and tickets to “The Wife” and other films playing at the Film Center, Capawock, and Strand theaters, visit mvfilmsociety.com.